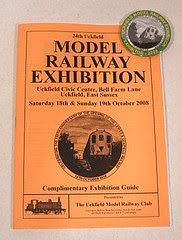 OK, it's been a week but I've finally go around to writing up the story of our trip to Uckfield Model Railway Exhibition:

Friday: Packed up. Drove down the M40, M25 and M23. Took some A roads to find the B&B we were booked into at Newick. Did OK until we got to the village but still found our accommodation using a combination of luck - and not finding anywhere to turn the car around. Mrs Thomas runs a small guest house which is home to paying visitors, 4 cats and 2 enormous Great Danes. If you don't like animals this isn't the place for you but as we do it's great. Were served with tea and biccies whilst fussing a particularly affectionate moggy. The dogs live in a conservatory which is good as they would be a bit heavy if they decided to leap on your lap !


Made it to the venue around half 6 and after booking in a couple of helpful members assist us in dragging the layout into the hall. It's a short walk but the help is really appreciated and the sign that this is going to be a nice friendly show. Our space has a table sticking over it so stuff gets dumped on this. Setting up commences and is nearly finished when the layout next door turn up and need the space our chaos occupies to get their layout in ! Drat, 5 minutes more and we'd have got away with it.

Once set up and happy everything works (one lazy point motor but nothing to worry about) we head back to the B&B and then on to a pub for some excellent Cumberland sausage baguettes and indifferent beer. If "Kent's Best" is the best Kent can do he better give up brewing for something else.

Saturday: Up early as the B&B only has one shower between 3 guest rooms and I wanted to get in it first. The central heating was over effective and about midnight we decided to open the window in the room and let some autumn coolness in. 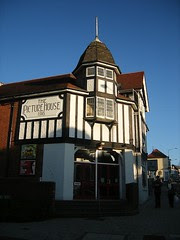 Before breakfast I took a stroll to get a newspaper. Newick has a general store, butcher, chemist (under threat according to a poster in the window) and baker. The later seems to specialist in doughnuts, or at least they like making them judging by the piles already available at 7am !

Breakfast is excellent, fresh eggs from the chickens (didn't I mention them) with our fry-up. The other exhibitors sharing the accommodation have brought S and Z gauge layouts and we chat away about shows.

A quick run to the hall and then a stroll around the high street. We could have got in and started up but with over an hour before opening, some fresh air seemed like a better idea. It's a nice little main street with some of the usual shops. A handy bakery gave my Dad a treat - cheesecakes - not the normal version made of cheese but the ones made of puff pastry topped with coconut strings. You only get them in the south of England and I'm not sure what they are really called so cheesecake it is. 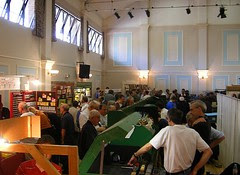 Back in the hall and the track is cleaned up before we wander around to look at the other exhibits. Our neighbours have brought a GWR branch terminus which is pains me to admit is really quite nice. Not so nice is the curtain erected along the back of the operating space on the P4 layout "Ferring". It's a big model and this curtain is like a wall. No one can understand it's purpose either other than to separate the fine scale operators from the rest of us.

The show isn't huge but it is quality. There are no duff layouts and hardly any you would call average. In fact I'd argue it's probably one of the highest quality shows I've ever exhibited at - not sure what we are doing there but anyway it's too late to get rid of us. The crowds certainly appreciate it and walking around in the morning is difficult especially in the side halls.

Lunch is served upstairs - I had a very nice lasagna while my Dad ate ham rolls. It's nice to be able to eat away from the layout. You get to chat with the other exhibitors and traders. In the show we are all confined to our displays and only get to socialise over the barrier while trying to talk and concentrate on operating the layouts or selling stuff therefore this is a nice opportunity.

The afternoon is quieter but no less chatty. The main question revolves around the Spratt & Winkle couplings. I'm not sure if we have converted anyone to using them but plenty now understand how they work.

In the evening the is a meal back in Newick. Our group of 27 just fits around a single table. Clever organisation means there are names against places and on the back of the cards a list of what we ordered weeks ago - something most had forgotten. The food is good as is the beer (Jack this time) and conversation. Just when we are all tired and merry a quiz finishes the evening and hilarity ensues as we try to remember who various dogs belonged to or decipher 76 T B in the B P.

Sunday: The last day is all about positioning - in the car park. We reckoned that by getting a spot not too far from the door we could load up without moving the car. I managed to find a space as close as possible and then we went for another wander. We'd have been there even earlier except that the chatting around the breakfast table went on longer than expected - a rather pleasent problem to have. 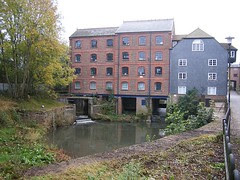 In the south of the town you find the station, a single platform terminus with no trains on Sunday, and a really attractive mill complex. I took a few pictures of this as it does have real potential for a model. The station, river and mill make a very compact scene and pretty bucolic. The signal box still exists and we chatted to the lady who works in the taxi office that occupies the top floor. Apparently the river often floods to a depth of 6ft above the banks. This means a new toilet every time the water subsides and watered down beer in the nearby pub.

Sunday is traditionally quieter than Saturday at any show and this was the case here. There was still someone in front of the layout pretty much continuously all day though. The trade didn't seem to do too bad either. The South Eastern Finecast stand opposite certainly flogged a few locos and I think Roxey mouldings did too. We left with an Isle of Man coach from them anyway...

Lunch was shepherds pie which was just as nice as the lasagna and just right. You don't want anything heavy but do need some stodge to get you through the day. 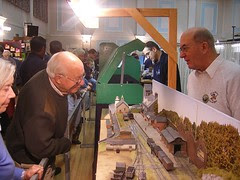 The crowds started to dissipate in the middle of the afternoon. With an hour to go stock was disappearing out of the fiddle yard and heading for the stock box. We'll keep running something until the death but as I've written before, if you come in at 4pm then don't expect things to be quite as perky as they were 48 hours ago !

As expected the layout was carried out easily to the car park. The prize for packing had to go to Flintfield. Heading back to Holland they were not only one of the first out of the door, but amazingly the whole model packing into two modest boxes carried on top of a small Vauxhall. I'm assuming that the technology is the same as Mary Poppin's carpet bag.

The trip back was easy enough other than an idiot Volvo driver (if you indicate you are overtaking and I don't accelerate so you can go by quickly then GO) and we were back home drinking tea by 9pm.

Much thanks is due to the members of Uckield Model Railway club who were friendly and help full all weekend. It make a huge difference to a show. Special mention should go to Adrian Colenutt, the exhibition manager, who was always around making sure everything was going OK.

And we are supposed to be going back next year. We're looking forward to it already.

More pictures on Flickr
Posted by Phil Parker at 5:23 PM