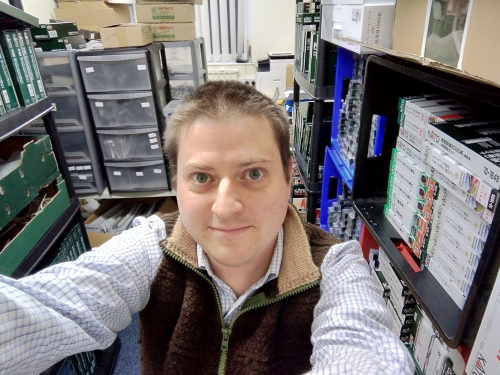 My name is Ian Miller. Phil has kindly allowed me to tell you a bit of a story about me, KATO and Train Trax.

At the end of 2021 I was fed up with my old IT systems job and decided it was time for a change. The prospect of an approaching 40th birthday made me think that life would be more fun if it could involve more trains, and more independence.

I have been a dabbling modeller in OO gauge for quite a while, with a quite conventional, unfinished, British outline freelance loft layout. In addition I'd been buying, cleaning up and selling models online to help fund the hobby. I found this almost as rewarding as running trains.

I had some ideas about how I could make this a full-time occupation, but in the end an accidental discovery led me along the journey to acquire the Train Trax website (www.traintrax.co.uk) in January. Train Trax exclusively sells KATO products in Ngauge. Keith, the previous owner who had run it for 14 years, had decided to take a long overdue retirement.

So I collected a very full van load of N gauge stock from Surrey. Included was a mass of Kato Unitrack, Japanese trains of all types, North American locos, wagons, buildings and all the accessories. On arrival at my brand new HQ in York I had to make sense of it all - I had dealt with very little N gauge or KATO stock previously!

I was first drawn to the trains which I was familiar with in real life: the Class 800 in LNER and GWR liveries, the Eurostar and TGV. My first impression was how intricate and good value they were. Once I'd had a good play with those I then explored the rest of the range of trains. They always find that they work straight out of the box - pop them on some Unitrack and off they go with no fuss.

Unitrack was probably the biggest revelation to me. It just clicks together and is ready to go. Fantastic Japanese precision engineering. There's no need for fettling of joints or soldering, and it can be re-configured repeatedly. The aesthetics of it might not suit the finescale purist, but for me reliable running beats that, and it's still perfectly possible to ballast and weather it to blend it into a scenic layout. I wish I'd known about it before I'd laid my own track, as I could have avoided a lot of hard work and frustration!

The previous owner of Train Trax recommended that I join the N Gauge Society, and I'm glad that I did. I found the local area group a friendly bunch, and by co-incidence found that they were experimenting with T-TRAK - a modular layout standard that relies on Kato Unitrack. One thing led to another, and now I'm retailing the laser-cut module kits that the group has designed.

Seeing the variety of stock that the group runs - UK, European, Japanese and North American has reminded me that one of the best things about the world of railways is the variety of different ways of doing things around the world. From very little previous interest, I now find myself researching the history of different North American loco liveries on behalf of my customers!

It's been a fun journey with Train Trax so far, but not without its challenges. Along the way I've learnt about global logistics and search engine optimisation. I now find myself running a small business in an incredibly difficult economic climate, so support from all the loyal customers that have continued to buy while the business was transferred is particularly valued. What next for Train Trax? KATO continue to have an interest in the UK market, via partners Gaugemaster and PECO, and are releasing new products every month, so there's plenty of excitement still to come.

Phil: I've not been paid for this blog post, but I'm happy to host it as a way of helping out people in the hobby. It appearing here in no way counts as an edorsement of the company. For all I know he's operating a Victorian sweatshop with small children being forced to do all the work. I doubt it, but I'll admit I haven't checked. I do like Unitrack though - used it in the past and it's great stuff.

Less paint, but still too much

Here we are, the pilot boat after another couple of hour attention from the cellulose thinner. Most of the paint has gone, but there is still some lodged around the base of the handrails - an a thin, eneven coat pretty much everywhere on the surface. 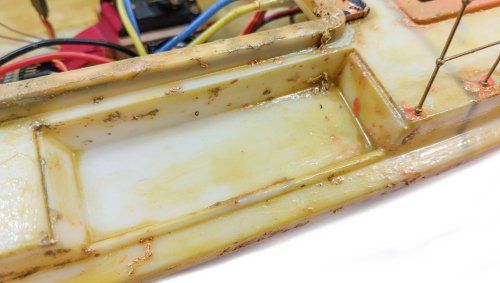 This looks better than it really is. Spraying over this lot will produce a rubbish result.

So, I've been digging around under the kitchen sink and have some Dettol and two types of over cleaner. In the garage, I'm sure there is some IPA alcohol too - I'm going to give them a go and will report back. 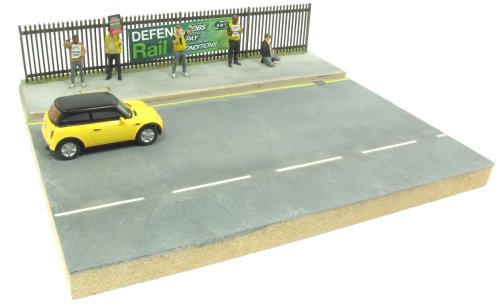 Over on World of Railways, I've written a step-by-step discription showing how I built a topical diarama - a picket line of striking rail workers.

I'll admit I'm very pleased with the way this little model came out. Apart from the 3D printed figures (ModelU), it's all pretty basic materials, including a lot of emulsion paint.

Anyway, the model has been living in my office photo booth, a safe space I thought. That is until I extraced a little photo plank on the self above it. This caused anther little scene to plumet onto the picket line, and the results are not pretty. 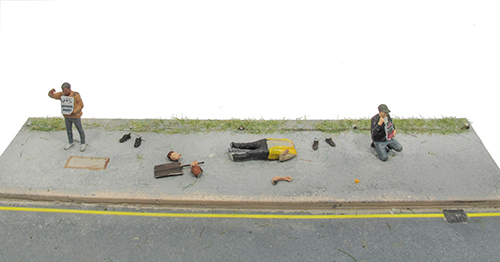 The resin figures didn't fair well, shaettering, then spreading their remains all over the place. I can't find two of the bodies for a start.

I'll have to rescue the two intact people. They can live in the model people pot until I can find another use for them.

But, why did this happen? Is it the ghost of Transpot Secretary Grant Shapps hurling dioramas around the room? It must have been a pretty accurate hit... 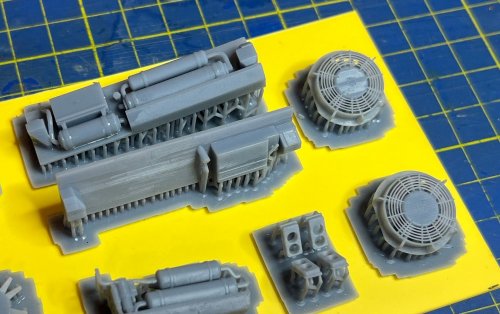 The news that Rob Waller has decided to close Boston Largs Works comes as a bit of a shock, but his logic is sound.

I have the feeling that an artisan, analogue, labour-intensive technology like casting is one that is living on borrowed time.

The trend has been clear in our hobby for a decade or more towards CAD and now 3D printing.

I can't disagree. Looking at the 3D prints my friend Chris Mead has produced for a fellow club members Class 69 conversion, I know that no matter how much time and effort I put into making alternatives, there's no way I could match them. I've seen the finished model, and partly thanks to a superb paint job, you can't tell it's not a modern, injection moulded RTR item.

I'll admit I've resisted 3D printing for a long while. Yes, I own an additive printer, and the topic has fascinated me for a long while, but I'm a traditional modeller.I like making things with my hands.

The future though, is largely making stuff on a screen, and seeing it emerge from some resin goop.

Now, I appreicate the skill involved in all of this. There's a huge learning curve required to grasp 3D CAD. Then you have to work out how best to turn that file into a physical model - it's not as simple as just pointing it in the direction of the printer.

No, I'm not saying 3D printing is skill-free, it's just a whole different set of skills.

I hope that for the time being I can see 3D printing as an extra tool in the toolbox of any modeller. It will probably replace a lot of those whitemetal lumps we used to use, and quite a few of the etched ones too.

But, is this me standing against the tide? Is the day when we give up the craft knife, razor saw and files on the horizon? In my more pessimistic moments, I think it is.

We are living in "interesting" times. The economy is about to take a kicking. In politics, the bullies are winning, supported by people with naked self-interest. And my escape from this, noodling around with bit of plastic, is always going to produce poorer results than the latest computer made stuff. Which also hits the work I do - who wants to read about making stuff when they prefer to just go and buy it? All modelmaking hobbies being reduced to credit-card waving and owning stuff.

Someone will point out that photography hasn't killed portrait painting, so there might be space for impressionistic modelling beside the perfect stuff, but I'm not sure how well the parallel holds up. Increasingly, the model railway world belongs to those screaming for perfect models, who then keep them in a box for fear of reducing their resale value, and because actucally building a layout isn't what they are in to.

Someone tell me I'm wrong.

I've mentioned in the past that my favourite space ship ever is the Eagle Transporter from Space 1999. One day, I'll get around to building the Airfix kit. Finding space for that in the cabinet will be touch, but how about a 25 foot long version?

Amazing work.  And stong enough to walk on.