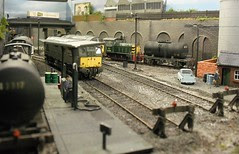 Lovely place, Princess Risborough. A very pretty town with little in the way of chain shops apart from the inevitable Tesco on the outskirts. Red kites populate the skies. There is an excellent garden railway shop near the station which is a ten minute walk from the high street.

The train trip in was lovely, the bright blue skies threw the denuded winter trees into sharp relief against the white fields. Every time someone announces that the country is disappearing under concrete, I wonder if they have even left the motorway and travelled in a more civilised manner. I could have spent a similar amount of money trundling down the M40 but this was a whole lot more pleasant.

Anyway, the show. Risex takes place in the Community Centre next to the towns leisure centre. It's small, three modest rooms, and very crowded when I arrived in the late Saturday morning. Entry for adults is only £2.50 and includes an A5 programme. There are 20 stands split between layouts and trade. And excellent home made cakes. You only get these at small shows. I can recommend the chocolate, of which I had the last slice. Mind you the Victoria sponge looked good as well... 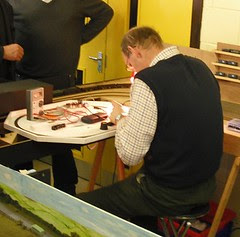 I know people get sniffy about small events but I like them. It doesn't really matter how large a show, you can always pick something up. For example, behind Chertonwell there was a fantastic loco maintenance bench complete with tiny test track and most importantly, a lip around the edge to stop tiny parts falling off. After chatting to Stuart about it, he has blogged fuller details.

Looking in the fiddle yards, I definitely covet the contents of those in Grey's Steelworks. Lots of industrial locos from many different sources. Several were conversions of DJH 02 diesels adding a front veranda that the industrial version of this prototype enjoyed. Others were bashed from Hornby 06 diesels. The traditional jack rabbit operating abilities of the chassis were tamed by plenty of lead to produce a reasonable result. The builder admits he'd still like to rebuild them at some point though to improve things even more. Most unusual was a Bo-Bo from an A1 models etched kit. This is every inch an industrial loco and a real brute to boot. Just the sort of thing you would have at a large steelworks.

Prize for "layout I'd like to build" goes to Viller street. This is a green diesel fueling point. Nothing special there except that it's viewed from end on - you look along the model. I liked the atmosphere and the detail as well as the unusual aspect. OK, so it would be deadly dull to operate but as a small model to show off a collection of post-steam rolling stock, it has a lot of potential. The move from a traditional MPD, where locos don't move that much, to a fueling point where they drop in and out for servicing, works well. With some intensive operation you could rotate quite a number of models through the scene in an hour. 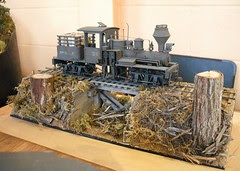 The main highlight for me though, is the demo every year of On30 rolling stock. Last year I loved the railtruck, now it's been joined by several other locos. All are displayed on small diorama pieces which show them off in context and obviously also provide some useful practise in scenery construction. I aspire to this quality of modelling once I get stuck in to the US narrow gauge scene properly. The builder (who was at lunch when I was ogling) had also made a shop front out of blue foam - the sort you buy from DIY stores - carving the brickwork into the surface. The results looked good with a nice level of deterioration, the sort you find in semi-derelict parts of "the wrong side of town".

Again, a nice little show. Worth the visit. And excellent cake. What more could you want ?

More photos on Flickr
Posted by Phil Parker at 10:51 AM