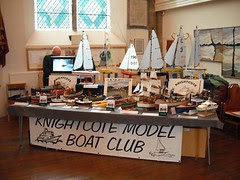 Model shows fall into several categories. At the top are the super high quality, single subject exhibitions - the sort of thing I take model railways too. These are focused, held in a proper exhibition hall and attended by a mainly enthusiast crowd who look miserable and don't like asking questions or appearing to enjoy themselves.

At the other end of the scale are the little local events where the display consists of a mish-mash of different items normally chosen because someone is willing to put on a display and fill space rather than any other reason. The audience is anyone willing to pay to come in and a fun time is had by all. Saturday was spent in something like this - the Air, sea and rail exhibition in St Nicolas Church.

Please don't think I am being disparaging - these events are the lifeblood of many a village fete or fundraiser. This one was held to feed the church restoration pot. Organised by a local modeller it saw displays of all sorts of hobbies that involved making things, just up my street !

The boat club put on a fine display. All the models on show came from a total of 6 people which shows that we either build a lot, or too much depending on your point of view. The vessels ranged from ready run yachts to scratchbuilt motor boats. Motive power covered sail, steam,electric and even a glow plug hydroplane. It's one of the best set-ups we've put together and looked fantastic. The tables were full and yet you could still see the individual items.

The timing was perfect - right at the start of the sailing season, we hoped to gain a few members. After all the local branches of WH Smith sell more model boat magazines than we have club members so there must be closet miniature sailors locally.

All this would have worked well except for one thing. No one came in.

Well, just over 30 people paid on the door and those we saw had a very nice time. Hardly surprising as there were lots of interesting things to see (more during the week on this) including boats, planes, trains, dolls houses to name bu a few. We all really felt for the organiser, adverts had gone out, posters were put up, word of mouth arranged via the congregation yet the numbers were disappointing. This was especially bad considering the previous years modest successes.

So, if you were in the Warwick area on Saturday and didn't go to the church to see the show, you missed out. We were there with lots of good things and a desire to talk about them. Instead we talked to each other and I won a prize on the raffle (some Tamya dinosaurs, best prize I've seen for a long while). Shame.
Posted by Phil Parker at 1:21 AM