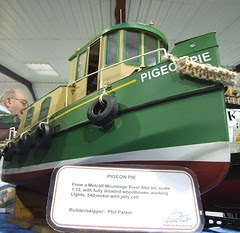 As the winter arrives, it's time for the model boat show. Just as we are all thinking "It's a bit cold so I'll give a trip to the lake a miss today.", we are gathering in a big shed in Warwickshire to stock up on goodies to build the craft we plan to sail when the temperature picks up in a few months.

The format was the usual mix of trade stands and boats on display. A modest poll is provided and unlike previous years, it's seen a lot of use. My attempts at booking a sailing slot on the Saturday afternoon we fruitless as all the frequencies had been bagged. The same story applied on Sunday. I think this is Neptune telling me to get a 2.4ghz radio set !

One of the high points was visitor trying to persuade me to sell him Pigeon Pie. He and his wife  liked my model a lot and the kit has been discontinued, although not for ever it appears, so there wasn't an opportunity to replicate my efforts. Needless to say, there was no deal. This is the pride of my fleet and not up for grabs. It's really nice to be asked though and certainly good for the ego.

Elsewhere, the highpoint was to see the ex-HFM Pilot Boat is being re-released in much improved form. I've ordered one as I really love pilot boats. Long term readers will know that my last attempt was a bit of a disaster but I'm confident that this time I'll get something on the water. Looking at the prototype racing around the pool, it really looks the business.

I've been taking time to look at other projects in my personal boat yard. Three Brede lifeboats and a Tyne that happens to be the same model I have plans for for a start. I might not make immediate progress but at least my photo collection is growing and one day, I will get started.

Talking of photos: Have a look at my collection on Flickr.
Posted by Phil Parker at 6:00 AM