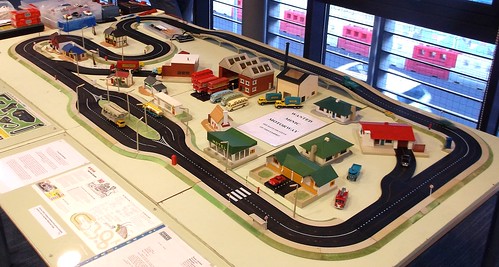 Back in the 1960s, my dad was a car racer. Specifically a slot car racer at the Luton slot car club. At the time, he helped them build a 120ft long 6 lane track and then enjoyed racing converted Airfix kits around it. Sadly, the club lost its premises and the track was dismantled. He them moved out of the area and never raced again.

Spotting a flyer for a slotcar swopmeet at a recent show, we went along out of curiosity. I know there is a bit of a hobby left, but didn't really know very much about it, but it's fun finding out.

The event at Coventry Transport museum was mainly trade, but there were a few operating tracks. 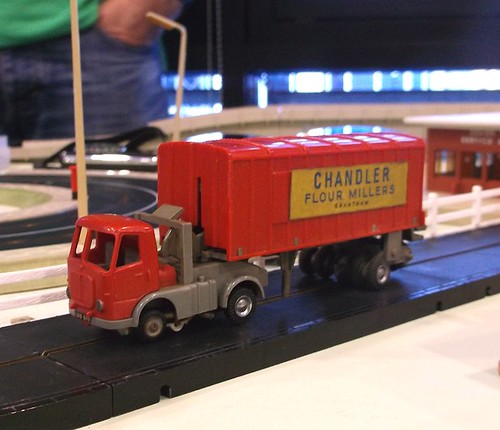 First I found some Triang Minic on which there was the rare operating Road-Railer unit. The owner tried to give it a run for me but it wasn't playing. He did explain how the ingenious chaps at Triang made the thing work as the prototype does. He also showed me the double gearing fitted to the steam lorry to make it trundle slower than the rest of the traffic - clever stuff.

And yes, a bit of me thinks that Minic Motorway would be a nice adjunct to the Triang working models collection, but I must resist. 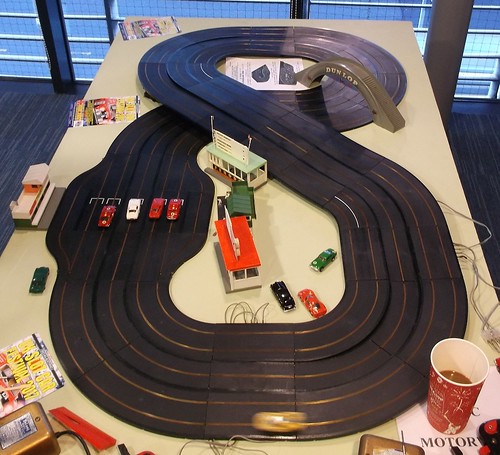 Next door was a rare 5-lane racing circuit. Triang sensibly tried to jump on the slot car racing boom of the time with a 4mm scale (ish) version using the same mechanisms. 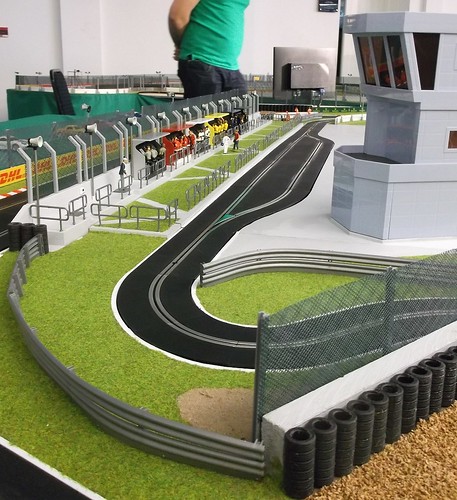 In another hall was a full sceniced model based on Silverstone. This was new to me and while nowhere near the quality of a model railway, it looked good and there were a lot of scenic accessories available.

Sadly, there isn't a slot racing club near Leamington, but if we could find premises, I think there are a few people around here who might be interested in starting one. Maybe I might build a racing Beetle or TR7 after all one day.
Posted by Phil Parker at 5:30 AM

You might need to start looking out for those 1:32 car kits that Airfix / Hornby seem to have started offering as "starter sets" - complete with small tubes of glue, small plastic pots of paint and cheap brushes.

I'm not sure, but I suspect they might have been to a similar scale to Scalextric, SCX etc. for a reason.

While I think of it, do you have any suggestions for sorting out their Mk.1 Ford Escort kit - getting the rear parcel shelf to sit right - filling in some of the visible dips in the bodyshell moulding?

Seriously though, model car racing always sounded like it could be a lot of fun. Whether it would have been as much fun as model trains is not for me to say.

Phil, if you go onto slot forum international you will find an exhaustive list of slot car clubs and if you see nothing in the area, ask on the forum.
I was astonished (after coming back off the canals) to find how much the hobby had changed and grown since it more or less died off in the late 60s due to raceways, works drivers and silly priced American motors. But it is now largely done to Scalextric classes with only a little modification allowed. Only a few Open meetings allow the more creative people to compete. I have made my living from making master patterns of new slot racing shells for these people in recent years. Compared to the outrageous prices charged for model railway motors and wheels it is a very cheap hobby.