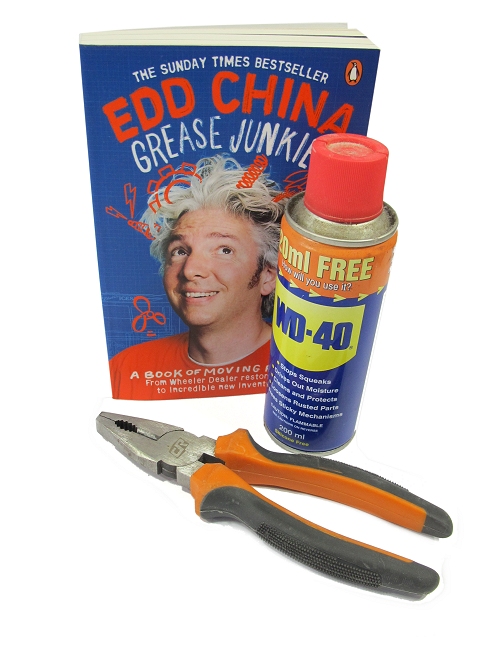 If you are a fan of the TV show Wheeler Dealers, you'll probably have enjoyed all the car-fixing spanner action performed by Edd China. Last year, he was unceremoniously replaced on the show and suddenly found himself with time on his hands - part of the reason this book has appeared.

In an audience-pleasing manner, leaving the show is covered at the start. Let's face it, that's one of the reasons many people will have bought it. But then it turns into an autobiography taking the young China through school days and into the world of making weird vehicles.

I'm always interested in people who make things so I enjoyed this a lot, especially as the earliest tinkering involved old Volkswagens and a very amenable mother who put up with some serious junkyards in the front garden. Unsurprisingly, the neighbours weren't quite so keen!

China's fame came largely from one project - a motorised sofa. This found a life as a promotional item and from there grew a dream job building oddball vehicles and other effects. From there he became involved with TV and film, the rest is history.

Probably my biggest surprise was just how much TV he had done before Wheeler Dealers. Watching repeats of the very first series, you can see how much it developed compared to the later shows. Obviously, the budget increased, but the quality and slickness of the filming improved and Edd's presentation skills came on too.

Despite this, he claims to be uncomfortable in front of crowds, getting past this by thinking that they are looking at the project he's demonstrating rather than him. In the early days, that might have been the case, but not so now! I readily identify with being happy to talk about what I've made rather than me however, although I don't have a problem with public speaking.

If you are looking for a lot of behind the scenes gossip from Wheeler Dealers, you'll be disappointed. We hear about some of the cars, some of the problems with the spannering, but very little of the personalities involved. The early days are a bit vague and I couldn't work out if he and co-host Mike Brewer actually like each other. The bonhomie on-screen came across well, but there isn't much mention of him in the book. Maybe there was a restriction from the American lawyers for the company that now makes the show. Maybe Edd doesn't wash dirty linen in public. Maybe I'm seeing something that isn't there.

The book is an enjoyable read, I finished it in a couple of days. If you think what you see on telly is as easy as it looks, you'll get a bit of a wake-up. If you need a bit of inspiration to follow a dream and understand that it is possible to end up doing work you enjoy, but nothing that a school careers expert would have ever heard of, this is it.
Posted by Phil Parker at 5:30 AM