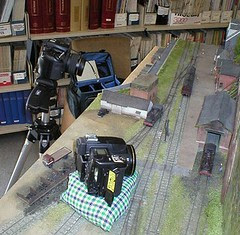 Cameras on the layout
Originally uploaded by Phil_Parker.
Ray Lightfoot from British Railway Modelling spent a couple of hours taking shots from all angles. He admitted afterwards that this had taken longer than he thought as although it looks like a simple little layout when you first see it, look closer and there is a lot more to see than you expect.

All the pictures were taken digitally and then checked on a laptop when the card in the camera was full. For techies the main camera was a 9mp Fuji 9500 and the smaller one a Nikon Coolpix with 5mp. Apparently both will produce an A4 shot suitable for publication but the Fuji with its higher resolution is also suitable for cover pictures. No idea what the difference is but then he is the expert.

My role was to make put locomotives and trains in the appropriate places and suggest some of the shots. And to hold the “sky” (a £4 roll of sky blue cloth from the market) when required. Although the pictures can be digitally manipulated to remove bookshelves and other background, we used the railway club as it gave more working space, a plain blue background makes the job quicker. We also diffused the strong sunlight with the sheet to avid annoying dark shadows.

All this electronic stuff contrasts with the first time I had a layout shot for a mag. That involved a medium format camera and resulted in 10 or 12 photos. All first class and beautifully framed but the photographer must always have been worrying what would happen if none of them came out !

I have no idea when the pictures will appear. Proofs will be supplied in due course and then there is the little matter of some words to accompany them.
Posted by Phil Parker at 6:57 PM