Why is my boat upside down ? 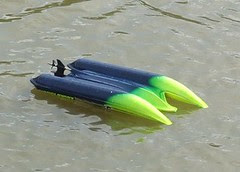 Underneath my boat
Originally uploaded by Phil_Parker.
It’s the last round of the Tomkat challenge. My model boat is ready and working. Batteries are charged. I can’t win, but at least I can have a race.

At the lake I do a single lap just to practise. Only one though as I don’t want to run the battery down – need to save all those amps for the race itself.

Heat 1: After a bit of messing around with the wind blowing boats about on the start line, we are off !

The Tomkat surges forward. Half way through the first lap I’m in the lead and running really well. At the end of the lap I’m ahead of everyone else and it looks like nothing can catch me.

Heading for the second corner I clip one of the other boats which is struggling and at right angles to the flow of traffic. This flips my boat over and the view is the one in the photo.

A quick-ish rescue with the rake and I return to the bench. The good news is the driver is still attached and not swimming with the fishes at the bottom of the pond. I play around with the controls, pour as much water out of the hull as I can and with a change of battery we seem to be working again. Not quick enough to get back in the race but I should be OK for the second heat.

The numbers are called for heat 2 so I check the boat again. Everything is fine. So I wander over to the water and launch gently. Then I try the controls. Nothing. Zitch. Zip. Dead as a Dodo that has been hit by a very large lorry and then run over by a steamroller.

So that is the story of my attempt at the Knightcote Model Boat club Tomkat challenge. About 70 quid spent, 15-20 hours painting and working on the boat. Several sessions fixing drive shafts and motors. All this for one-and-a-bit laps.

Somehow I don’t think I’m cut out for racing.
Posted by Phil Parker at 4:22 PM