My bank recently sent me a "PayTag". It's a sort of fat sticker which anyone can wave near a contactless payment device to hand over money. According the adverts on the telly, I am supposed to stick it on the back of my mobile phone. My bank feels a mobile isn't enough of a thief magnet, so why not add the ability to extract money from my bank account too ?

I didn't even ask for this stupid thing, it's just rubbish that the bank sends out. Despite this, it's my problem to deal with it. Sadly, you can't just chuck something like this in the bin. That just gives your rubbish the ability to empty your account. No, it needs to be disabled. What a good job I am tooled up.

First up - 45W soldering iron. This melts the plastic satisfyingly but it's a slow process. Covering the soldering iron bit in bank gunk won't improve it either, leading to me spending more money on a replacement if I'm not careful. 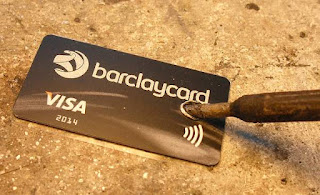 Despite this.  I felt I was on the right track. The job just needed more heat. Time to fire up the gas torch !

Warning, this part of the job is smelly. The card burns well but produces thick black smoke which I blew out of the window with a desk fan. It's probably not good for you so if you follow my example, don't breath in. Or wear a mask. Or a spacesuit. But not a flamable one. 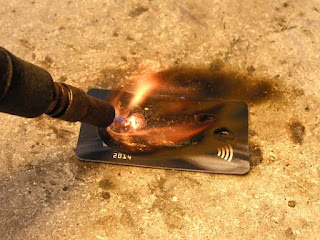 The card itself very quickly became crispy. Poking at the remains with a screwdriver, the RFD chip inside is more charcoal than silicon. I reckon that the hoards of terrorists and identity thieves that the government assures me are going through my rubbish will be stumped by this ! 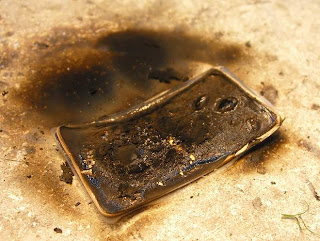 So Barlcay's bank, your evil plan is foiled. Now, I wonder what else I can destroy ?
Posted by Phil Parker at 6:00 AM

Yeah, that's told 'em, vandalism made good.
Here, le French Poste has decided that it will not accept cheques that you wish to pay into your account over the counter. Their security-free decision is that you put it in a specially marked envelope with a paying-in slip that you fill in with your name and address plus bank account details!!! No naughty people in the sorting office will spot this will they? When we pointed this security flaw to our local post lady she gave a (Gallic) shrug of her shoulders.

Uyou actually have to apply to get a pay tag, so you didnt ask and it didnt just turn up

Well I've now recieved two PayTags and yet have never requested either. So I DIDN'T ask and they DID both just turn up.

Lol i guess they saw this and decided to send you another, just to twist the knife that little bit more.