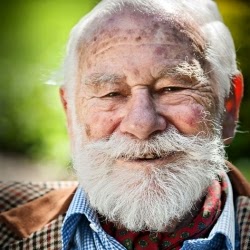 Many will remember Bob from his TV work showing both models and serious engineering. He was a natural broadcaster whose demeanor and enthusiasm were perfect for explaining often complex projects. He really cared about the topic and it showed. More to the point, with that facial hair, he looked the part too - a proper Victorian engineer.

Nowadays, you have rent-a-gob presenters who can just about read an autocue as long as the words aren't too long, Bob could have whipped out some spanners and done the job properly.

They say you should never meet your heroes. Well, I met Bob and am happy to say he was just the same in person as he was on screen.

At the time, I was exhibiting Hellingly Hospital at Brighton Modelworld. Returning from a break, Bob was viewing the layout. I plucked up courage to start a conversation and quickly discovered he was not only familiar with the prototype (hardly a surprise in retrospect - an unusual railway near where he lived, he'd hardly miss out on that) but knew some aspects better than I did. I put down my inability to remember the overhead line voltage down to being slightly starstuck!

An accomplished modeller and engineer, Bob produced the sort of innovative work that made the country great. I remember reading about his efforts to build a real miniature diesel-electric locomotive. This wasn't an easy task involving much experimentation - not just a case of slotting a few bits together.

Sadly, the hobby has lost one of its great names. Let's just hope some of the people he inspired carry on his work in the future.

Note: Bob Symes picture at the head of this post is used by kind permission of  Chris Nevard and Model Rail Magazine. It must not be copied or distributed in any manner without their consent.﻿

Phil, just to balance the adulation..I also met him at a Gauge 1 meeting, where he had his diesel hydraulic loco.
Someone else ran it for him.
People were asking him questions and he just wanted lunch (free) even though he'd only just arrived (late). He was off hand with everyone and looked down his nose at all who asked questions of his or tried to make contact. Those of us who have never been impressed with the man were left asking why the Devil he'd been asked to attend! His simpering, condescending style of delivery always annoyed me intensely. I don't recall when or why, but he changed his name from Railway Modeller's Robert Symes-Schutzman to TV's Bob Symes, which I also thought rather odd.

I feel Odds' 'balance' is too harsh - everyone has off-days.

He was a presenter that captured my brother and fathers imagination as well as mine. My father did meet him several times throughout the 60's and was of the opinion he was a normal, pleasant bloke.

So what if he did shorten his name for TV? Utterly irrelevant.

He was a long term friend of my fathers, So I have known him since I was young. I feel all this can be said of him,but never there for a free lunch. Really do feel you got him on a bad day. He was always very kind, patient, and enthusiastic and yes he knew alot about trains and loved to tell people about it! We can't all be liked by everyone.Did also have a wicked side, don't we all.

A very charming gentleman who not only knew railways but music as well.He showed me and played me some beautiful music as our patron at Hospital Radio Lion at the Royal Surrey County Hospital at Guildford.