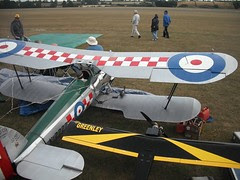 A bit of a departure for me this one. It's all my Dad's fault. Once upon a time he was a youth interested in aircraft. Time in the Observer Corps and lots of illicit visits to airports, the sort of thing you'd get arrested for now and nearly did then, followed and explains why his photos are of things with wings and propellers rather than wheels and buffers.

Anyway, we'd both seen photos of larger model aircraft and really fancied seeing the real thing. When I say large I should explain that in this case size really does matter. You need a 6ft span before you don't get laughed out of this club. Get to 20 feet and people really take you seriously.

Cosford is easily reached from Leamington thanks to a stunningly fitted out Wrexham and Shropshire train. When we arrived it was a bit drizzly but even so there were a couple of jets buzzing around visible in the distance. And when I say jets, I don't mean planes that look like jets with windmills stuck on the front. I mean model jets with real jet engines inside them for power. They could shift too and sounded fantastic too. Well, fantastic is your idea of quality sound is a small jet engine on full chat screaming around a few feet up in the air. 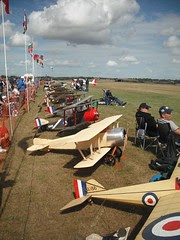 Entry was 9 quid, which probably seems pricey to model railway enthusiasts but I doubt hiring an airfield is cheap and you have to do and awful lot of health & safety work to put on this sort of event so paying for the miles of orange fencing has to be covered somehow.

We walked across to the event and were surprised just how bit it was. At the time the jets had been replaced by a couple of bi-planes complete with Cindy doll wing walkers. These waved both their arms and  legs. It was quite funny to see them waving to the crowd as the planes taxied back to the flight line. They made smoke (the planes not the Cindy's) too just like a proper aerobatic team. From the ground ti was difficult to tell these were models.

At a guess there were at least a couple of thousand people visiting, possibly double that. Someone later told me that there were over 200 planes on display too. I can well believe this and it's a whole lot more than the dozen or so we expected. Trade was pretty comprehensive too, at least 40 tents were on hand to provide shelter during the showers and relieve people of their money.

The day improved quickly and the 4 ice creams vans on hand did good business. For me the highlight was the Victor and Vulcan bombers in the air. While appreciating the grace and shape of the Vulcan, the Victor always looked a bit odd. To see one fly though, even if it was a miniature (18ft span) version, was a sight to behold. It looked a dream in the air. Pity that all morning the commentator referred to it as a Valiant. Presumably during lunch someone dragged him to the Cold War Gallery where they have examples of the real thing and explained...

What I don't understand though is what makes anyone wake up in the morning and say, "I fancy building a half sized biplane. I've got an old microlight engine in the shed I could power it with." Nor how after three years building, you can power it up and point the front end skyward. There were two crashes during the day, a Foker triplane was completely lot thanks to a radio problem and  a WW1 British biplane crunched repairabley as it's owner tried to land it in cross winds. These guys aren't afraid to fly though. rarely was there only a single aircraft in the sky, many times you could see half a dozen or more. Most memorably were the air racers with 10 people flying around an oval course at the same time ! 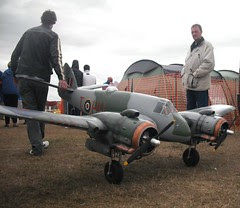 The range of prototypes was amazing too. A couple of airlines for example - Comet and 737 (I think), or a weird prototype bomber. Lots of WW1 planes but very few duplicates. Power came from both IC and electric engines. A Flying Fortress had a sound system fitted so the drone sounded like the real thing and covered the silent brushless electric motors ! Several planes did more than just fly with bombs and parachutists emerging from underneath.

This was like a proper old fashioned air show. But one with planes from all ages. If inspired, it was one you could anticipate taking part in next year too. There are quite a few almost ready to fly aircraft for sale. By the time you've kitted one out I doubt you see much change from 500 quid but them when you think of the price of a good model boat or railway layout, or worse a classic car, then the prices look very reasonable. For the scratchbuilder entire forests of wood were on sale and it's pretty obvious that most of the models in the sky owed more to this than and Chinese factory. Another thing spotted was that the age of the modellers building and flying the planes was quite a lot younger than that seen at model railway, boat or engineering exhibitions. Maybe this is the future !

To give you an idea how good this event was, we'd arrived at about half eleven and planned to get a look at the museum during the day. We got half an hour before it closed at 6pm. Next year we'll go earlier and forget about the real planes. They will be there another day.

I took a lot of photos. Some of them are here

RAF Cosford
Posted by Phil Parker at 6:40 AM