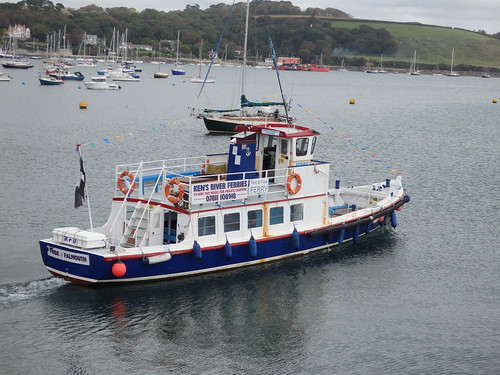 Firmly in the list of boats I'd like to build a model of are the Falmouth ferries.

According to this web page:

Pride of Falmouth was originally the Adrian Gilbert. Adrian Gilbert and Humphrey Gilbert were built for British Railways (BR) in 1957 for the Dartmouth-Kingswear ferry service.

The service and the two sisters passed into local authority ownership in 1972, when BR closed the Kingswear branch beyond Goodrington.

Adrian Gilbert was sold to Dart Pleasure Craft, who had taken over the Dart ferry from the local authority on 1st January 1977. In 1985, she was re-joined by her sister Humphrey Gilbert, now the Edgcumbe Belle.

Adrian Gilbert was sold in 1996, joining G.H. & W.G.Pill of Falmouth, apparently proving more successful on the St Mawes ferry second time around. She passed to K &S Cruises as the Pride of Falmouth in 2006.

Sounds perfect for me, a railway boat that I like the look of. The 58-foot long design seems nicely balanced and could be modelled in a sensible size so it's not too big to handle, but large enough for detail and to cope with sailing on our lake. Anyone got a plan?

There are, or were, a lot of good books on the ferries of the South West.

And two of the ferries are now a long way from home on Ullswater.