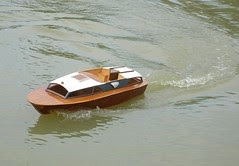 fairey near plane
Originally uploaded by Phil_Parker.
After bench making this morning, the Fairey hit the water. I wanted to see what a difference the new motor, battery and speed control made.

The good news is the boat went up on the plane. It's not rocket powered but nice and controllable on a lake the size of ours. Most importantly it looks good.

After a few minutes I filmed the model and you can see the video here. The speed had dropped a bit but you get the idea especially head on.

A couple of minutes later still there was smoke coming out of the windows. Back on the bench the motor was red hot. I've not connected up the water cooling jacket yet. This is obviously not a good thing.

My hope was that the problem stemmed from the whopping 4 -blade prop being too large and stressing the motor. Once it had cooled down I swapped this for the original 2 blade plastic version and tentatively sailed again.

One the water the model was as sprightly as with the bigger prop, possibly even a little better. I'm not going to pretend to understand how a small prop with two blades is better than a big one with 4, but I'll go with it and stick the big 'un in the box for a future model.
Posted by Phil Parker at 6:36 PM