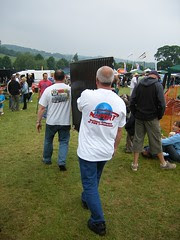 Stoner park (insert joke here...) is one of those VW shows I've meant to go to for about 15 years but never quite made. With a bit more time on my hands I decided that this was the year. Then I found it clashed with a load of other things. Anyway, looking at the map the show ground is only just off the M40 so if I used a modern car I could bat up and down there comfortably in a day. And I didn't get to Stanford Hall this year and needed some wiper blades.

Today was the day and off we set. The trip from Leamington was pretty easy and only 63 miles. That's about an eggcup of fuel in the Berlingo as far as I could tell from the gauge.

Anyway I'm not going to write a book but here are a few notes:

I'd go back if I could combine it with a camping trip. The area is good for this so manybe next year...

Email ThisBlogThis!Share to TwitterShare to FacebookShare to Pinterest
Labels: VeeDubs