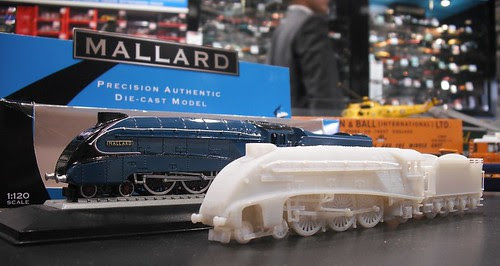 A recent trip to ModelZone in Birmingham saw me poking around at some of Corgi's prototypes for new models due this year and next. The first thing that caught my eye were models of Mallard and Flying Scotsman. These are 1:120 scale, although being solid diecasts, they aren't really suitable for motorisation. The end result would be interesting though as you would be working in Continental TT gauge - in the UK we prefer 1:100.

The models look pretty good with nice separate handrails and fine valve gear. Must more interesting were the prototypes for the models. These, the rep explained, were machined from the CAD files and used as approval models. They appeared to be a nylon-like plastic, it was hard but a little soapy. The cutter marks were evident, something not seen on the finished models. 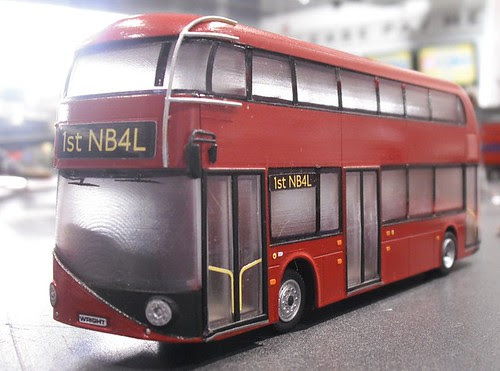 Another prototype on show was for the modern "Routemaster" bus for London. Apparently Corgi have been told in no uncertain terms that these are not to be referred to a "BorisBus" despite this being what people will call them in real life. This prototype was decorate but still prototyped in an opaque plastic. I'll admit I quite like the look of the design. It's not un-Routemaster like whilst being modern in a way that the future was painted in happy sci-fi books 30 years ago. The large window curving around the back up the stairs is sure to be a popular feature too - with men watching anyone in a short skirt heading for the top deck... 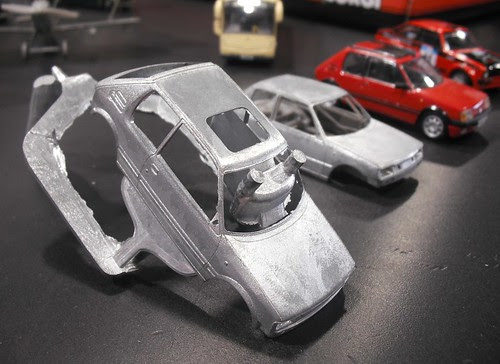 The invite for the event said that Corgi would be taking requests for new vehicles so while I was there I suggested a 1971 Beetle (not a 1302 or 1303), Bay window VW camper and Peugeot 206. Basically, all the cars I own, none of which are to be bought in toy form. As you can see, they have done a 205, an iconic supermini so maybe I'll get lucky.

Seeing the raw castings shows just how much hand finishing each model requires. All those runners have to be ground off by someone with a power tool, then the casting is cleaned up before all the separate bits are fitted and the model heads for paint. Several prototypes on show were a mix of metal and plastic parts. This allows for several variants to be produced simply and extend the sales of a model.

Sales matter of course and one snippet I picked up was that the ranges of all the diecast manufacturers will be pointed at the unusual because that's what people will shell out for. In 4mm, it will be a while before we see any modern cars for example, but the Ruston bucket shovel will be on sale with shovel, dragline and crane fittings. So, if you want to change this, write to the makers today !

The finish of the rapid prototyping is not the cutting marks, but the layers used to build up the model. They are effectively built up as slices of the model a few thous thick.

That's what I thought, but the rep tells me different. It seems that the rapid prototyping they use is CNC milling based. Maybe this is so they make a test mould and then produce the plastic item from this and the lines are from the mould.