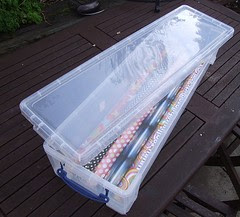 Last year I bought a plastic box and built a layout in it. At this years Model Engineering show, I bought two more boxes. Which can only mean one thing...

Layout 1 is being built for a reason - while working on the Foxdale project, I'm concerned that persuading the rolling stock to work as well as I would like will require lots of testing. Now I could use the layout but it's going to be 5ft long and quite wide so not ideal to have set up all the time. What I need is a test track.

So, the plan is to knock up something that will fit in the box. It will have plenty of points and some bends. If a loco or wagon runs around on it, then it will be considered fit for the main layout. We learnt the hard way when building Flockburgh that untried rolling stock and an untried layout do not make for harmonious or pleasant modelling. I reckon any time spent on this project will be more than saved on the main one.

Sadly, I will have to do something clever with the baseboard design as at 74cm long, the box isn't big enough for a run round loop, but I already have and idea how this is going to work.

Talking of plans, this one was run up using AnyRail 4, which looks pretty good especially as you can download it for free with a few limitations. My effort isn't to scale but it is easy enough to pull scale track sections out of the pallete and plan away. It's certainly good fun for those who just want to daydream a train set.
Posted by Phil Parker at 1:37 AM