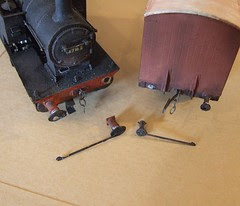 Beconsfield model railway exhibition wasn't just about scoffing cake and wilting in the heat. Obviously we had to play trains all day as well and this wasn't entirely without incident.

Early in the day I brought a train into the fiddle yard. While re-marshaling it ready to go out again, I spotted that one of the banana vans was missing it's coupling bar and one of the buffers. A quick search of the layout found these by a buffer stop and the wagon was returned to the stock box upside down.

A few hours later, my Dad was having problems shunting and realised that the same fate had befallen the LMS dock tank. As you can see, the coupling bar has pulled off and taken a buffer with it.

Fortunately, the buffer was attached with suprglue. Normally I solder these to the locomotive but this kit was a bit more difficult than normal to assemble and by the time I'd got to buffers, there was a lot of plastic involved, not a soldering friendly material. If I'd not used glue, the components would probably still be attached.

All is not lost though, superglue breaks nice and cleanly so a dot on the buffer beam and another on the end of the bar and the parts are restored. So neat is this that there isn't even a need to repaint anything, another good reason to glue vulnerable parts in place. Or be more careful while shunting.
Posted by Phil Parker at 1:34 AM