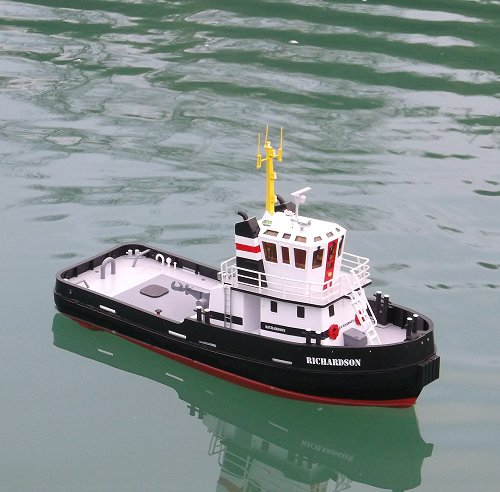 A Christmas present was given its first sail last week. Oddly for me, it's not a kit, but a RTR model.

These tugboats have been available from Howes models for several years. Southampton is the colourful version, but Richardson looks (IMHO) much more realistic. 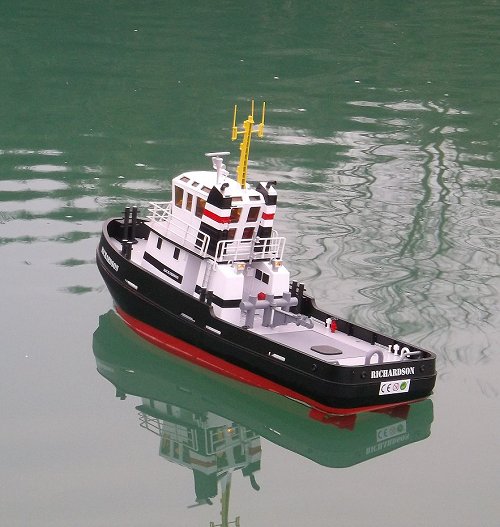 The specification is pretty impressive. For a start, the radio system is 2.4gHz so you can sail with other people. No swamping the 27mHz frequency so you have to be the only boat on the water. Admittedly you do need to read the instructions to bind the transmitter to the boat, something I suspect throws a lot of people, but it's easy enough and only takes a few seconds.

Once working, the model has all the usual proportional speed and steering controls you would expect. Speed is slightly high for a tug, but indicates there will be enough power from the twin shafts to tow a load.

Best of all - lights! Navigation, front spot, rear deck and cabin lights are all controlled from the handset on different buttons. There's also a horn and smoke effects.

Beyond all this, the model is very nicely detailed. That's the best thing about these boats, loads of potential. I'm thinking some weathering for a start followed by a few detailing bits. All of which will be easy as the base model is so good. 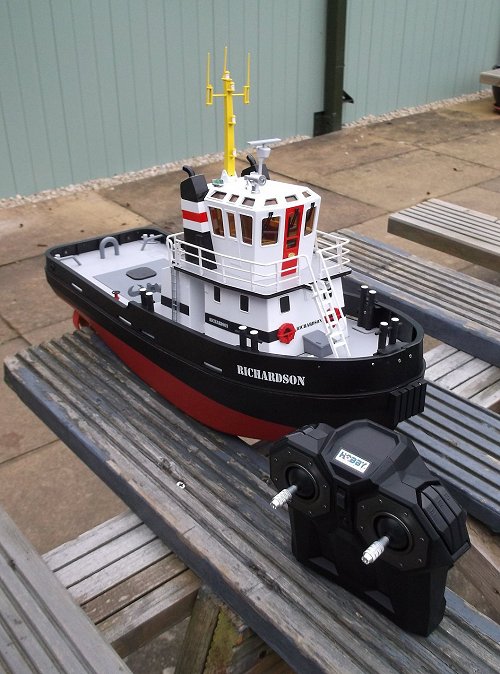 First on my list is to relocate the on/off switch to somewhere more convenient than under the superstructure but after that, I'll just sail and enjoy it for a while.

For the price, this is a bargain. I'd have paid that money for a kit without running gear and not thought myself diddled. OK, buying (or being bought in this case) a RTR model might seem a bit of a cop-out, but I'm happy.

This would be a great introduction to model boating for a newbie. You can get on the water straight away, apart from the 6-hour battery charge, and sail with others. There's no need to rip out basic radio gear or fiddle in any way - just sail!
Posted by Phil Parker at 5:30 AM

Looks fun. You might want to remove the glaring CE sticker from the rear though :)