How would I do this? 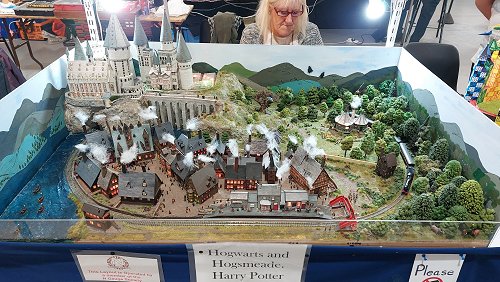 I always say that it's possible to learn something, or pick up an idea from any model railway you see at a show. No matter what the prototype, scale or level of finescaleness, the builder will have done something that should catch your eye.

A lot of people will have walked past this Harry Potter themed layout at TINGs a few weeks ago, dismissing it as a novelty unworthy of a "serious modeller's" time when there were "proper" layouts to look at and trade stalls to be scoured.

IMHO, they would be wrong. There's a lot of work, and a considerable amount of imagination involved with this project. And it's one that Potter fans will both love, and pick holes in when they see it.

The part that impressed me most, was the roof of this house. 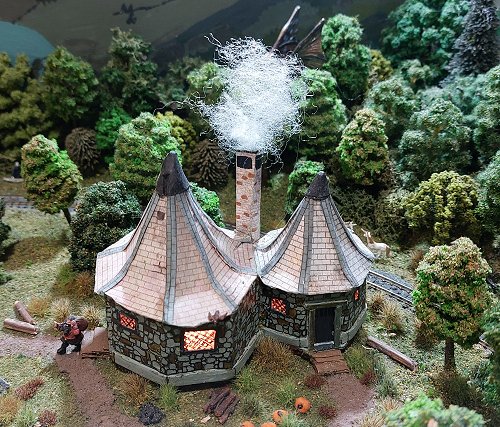 I understand it's Hagrid's house. This doesn't help me much as I have no idea who Hagrid is. I've read none of the books, and only seen the first Potter film, because I was projecting it. Since our booth didn't have a speaker in it, that also means I didn't hear the first and last five minutes of the film.

Anyway, the question I ask myself is, "How would I make that roof?"

It's pointy, and curves at the bottom of the slope. My best guess is there is a former underneath, but quite a complicated one as there needs (in my mind) to be support under each ridge tile. Assuming this is in the book, they must have been cursing JK Rowling. A flat roof would have been just as nice, and a lot easier to build a model of!

Sadly, I was too busy at the show to ask the question, so it will remain a pleasent mystery.

My daughter was into Harry Potter in a big way for a while and I must have seen all the movies at least twice. This looks to be a well made and detailed model, and even if based on an imaginary prototype, that probably makes it more prototypical than many layouts!