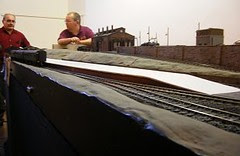 L&WMRS 7mm scale layout
Originally uploaded by Phil_Parker.
Here’s a hint. If you want to see a model railway show and have the space to circulate, ask questions and generally enjoy the event in a relaxed manner, go just after lunch on Sunday.

At that point today, Banbury show was depressingly light on public. Pity really, as it was a decent exhibition.

The trade was very good. Far better than many larger shows I’ve been to. RTR, second hand, kits, tools, if you wanted it you had a pretty good chance of getting it. OK so this isn’t a York or Warley but for a local one day show it was much better than average. I bought 16BA nuts for example. The chances of finding these at many events are nil.

Layouts perhaps weren’t so good. Plenty of middling O gauge including one who proved beyond all doubt why you should put a curtain around the bottom of the layout. My favourtie was undoubtledy the huge Minic Motorway display which ad small cars hurtling around to the joy of the kids (big and little) who stared at it enthralled. Selah (Fruit Row) is a previous favourite of mine and appeared in a shorter form than I’d seen before. Most thought wouldn’t have awed people but would have provided something to aspire to, with a good chance of managing it. The operators were keen to talk as well so you could ask all those questions you wanted answered.

Best layout was won by the L&WMRS O gauge layout which appeared as an end-to-end model. Normally it’s a roundy-roundy but for space reasons they’d had to build a fiddle yard for one end. Unfortunately it was on the stage where there is hardly any light but watching the carriages shunted in the station did look good.

I’d dropped in because:
a) It’s not far away from home and easy to get to.
b) I needed to see Trevor to collect a Class 14 Diesel kit which I need to get built for it’s launch at Warley in a couple of months. Look out for this on the blog soon.

What I don’t really understand is why the crowds stayed away. It’s a good show. Certainly I’ve seen more people at worse events. Do modellers prefer to go only where there are half a dozen RTR sellers trying to compete ? Do they only like the big events ?

Whatever the reason, and comments would be appreciated, it’s their loss. Put it in the diary for next year.
Posted by Phil Parker at 6:38 PM