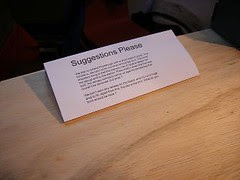 suggestions paper
Originally uploaded by Phil_Parker.
Beyond the station at Flockburgh we need some more scenery. This all started a couple of years ago when Cyril Freezer looked at the layout and suggested that the model would make more sense if there was something to explain why the track finished where it did. He was right so something had to be done.

We built an eighteen inch long board to accommodate this “something” a while ago. Working out exactly what to put on it has taken longer. Whatever goes on the board has to be something important, too important or difficult to be demolished when the railway was built.

With no hard an fast ideas, we though, “lets ask the public”. The board was attached to the model with a couple of clamps and a note attached asking for ideas.

This was amazingly popular. Lots of people made suggestions, some stupid but most sensible. Many involved adding some water in the form of an estuary or harbour inlet. Others mentioned castles or chapels with graveyards. We’ve considered these but considered them too large for the space. Apparently we were wrong as several prototypes were suggested that would fit the spot.

What was really interesting was the seriousness that people treated the request with. Flippancy was rare. Many more asked where the model was set and provided ideas accordingly – there aren’t many Martello towers in Scotland but apparently there are a few small forts in the north.

So we have the ideas and now have to work out what to do. Watch this space.
Posted by Phil Parker at 5:07 PM