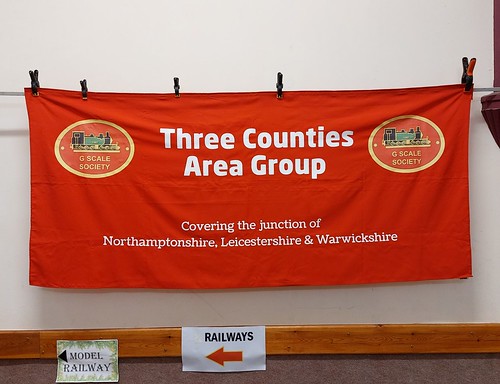 From one of the largest shows, to one of the smallest. At the L&WMRS open day, someone mentioned a garden railway show in Hinkley, but I didn't realise where it was until the 3CAG (Three Counties Area Group) of the G scale society newsletter appeared in my in-box.

Taking place on Friday evening and all day Saturday, I decided to head over on the Friday so I could do a little social media for Garden Rail once back at home. To be honest I hadn't expected much, but am really getting into the smaller events. These are where you find things you've not seen before.

Arriving at the church hall, the first person I bump in to is John Sutton, and we chatted for a while whilst our noses were asailed with the smell of sausage rolls being cooked. Eventually, I went to investigate and enjoyed not just this, but a crumpet and mug of tea. 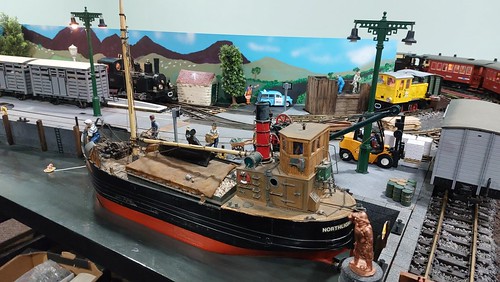 In the canteen area was a nice G scale layout that normally lives in the owners shed, and is the sort of indoor layout a lot of people would dream about. Enough space to let your smaller LGB trains circulate as you watch them pass by.

Moving to the main hall, there were more layouts, and more trade. Once stand even had piles of Peco cardboard coach interiors for Kitmaster coaches!

Heading upstairs provided the biggest surprise of the event. A massive Playmobil layout.

This lives in the owners loft, there are holes in the boards for the joists. Apparently, it has been exhibited in the past, and is booked into the Warwick show next year, and Warley. This will be something to see if it happens, although I'm not sure how the two-day setup will work at the NEC.

35 years old, the model is a sea of plastic with several trains running. It's so detailed (is that the right word?) that you'd need to study the model for ages to spot everything. Playmobil nerds will spot quite a few rare items too, although I'll admit that my knowledge is limited to some of the trains.

These weren't the only layouts of course. For a small show, there was a lot to enjoy. Maybe not the highest quality modelling, but real fun. Model railways can be as much about the people and the chat as they are about rivets - and all the better for it.