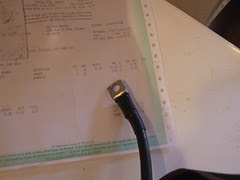 I've hung on to this post for a couple of weeks to try not to jinx myself.

My van is fixed.

At least the "losing all the charge in the battery after a couple of days" problem is. First of all I replaced the main cable between the battery and the starter motor. I had tested this and proved that it was leaking charge even when not attached to anything else. The replacement was sourced from Lucas Electrical who made a special up for me for 17 quid. It needed to be about 6 inches longer than anything I could buy off the shelf otherwise I'd have gone down that route.

I also had the battery tested. The test device said "Charge and test again". Since I'd charged it several times in the previous few days I decided that this didn't help and bought a new battery. It was about 20 pounds cheaper than Halfords !

Anyway, despite experiencing cold, damp, foggy weather the charge has remained good and the cab voltmeter says 12v even after a week of no usage.

Writing this probably means a flat battery in the morning of course...

"Writing this probably means a flat battery in the morning of course..."

So, did it fix the problem?

Not entirely. The change has made a huge difference. The battery doesn't lose any charge for over a week of foggy, damp weather but I still think there is a very slight current drain that I need to track down though.