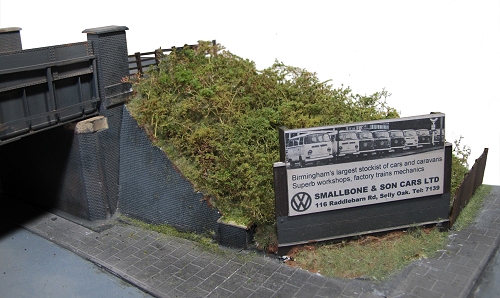 For the embankment at Selly Oak, I wanted some really thick, scruffy undergrowth. More texture than static grass alone could offer. The sort of horrible, spiky bushes that self-set in ground no-one cares about, forming a thick and impenetrable barrier if you try to walk through them.

After a little bit of pondering, I decided to use lots and lots of small pieces of "Forest in a Box". Green Scene supplied me with a box marked "S" which contained shot, but dense material. All I had to do was cut it up even smaller, dunk in PVA and press home on the embankment. 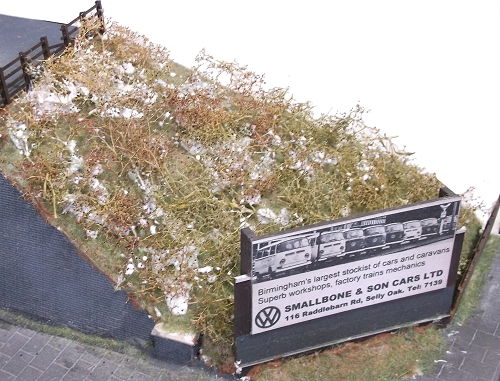 After that, watered down PVA was poured everywhere to ensure the stuff stayed put and then using hair spray and scatter, the bushes were given their leaves.

What should have been a quick job took more time than expected as the Seafoam needed to be cut into small pieces and quite a few of the less dense stalks were discarded. It looks nice though, in a horrible, wouldn't want to have to retrieve my school cap from there* sort of way.

Ideal for an urban fox den

I don't know why, but I had an image in my mind of some of those green abrasive fleeces - often used for scouring pans - instead being stuck down to a brown substrate.

Of course, other colours are also available - and it might be better if the abrasive fleeces weren't exactly pristine - perhaps even old dishwashing sponge / scourers, once they've worn down into holes and the abrasive bit has started peeling off.

OK - they'd need to be washed first - but, as long as they can be stuck in place, there wouldn't be too much work needed to make them look rough and generally nasty.

Only a thought - and probably not a very good one.

As Huw suggests, a friend has literally just blogged about that experience:
https://princestreet.wordpress.com/2021/02/01/scrub-that-1/

Good to see another alternative Phil - and one I've used in the past too, the PVA should ensure it's brittle nature isn't too much of a problem!