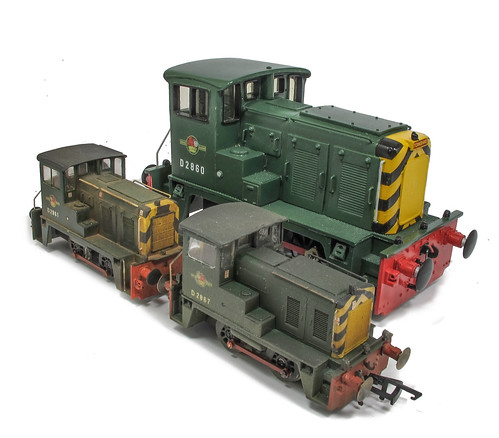 Over the years, I've built quite a lot of Class 02 diesels. The first loco kit I bought was a DJH beginners model. The ready built chassis appealed to me as the £50 price tag was a big chunk of cash to a trainee (and hopeless) accountant earning a pittance.

I asked my friend Dave Elbourne to look at it during a show and he said it all looked good so I jumped in.

The resulting model looked great and worked well enough to do a few turns on Scotland Street - something I was very proud of. The photo below shows it working the yard.

Eventually, the whitemetal chassis twisted, probably the reason later kits came with an etched version, and the loco ran like a dog. Then it was stolen and replaced with a Craftsman etched brass kit.

I think I've built two of these. One was for my bookazine, as I considered it the perfect introduction to the medium.

Since then, there has been a 3D printed kit which went together well and finally, the O gauge beginners kit from Tower models. This one is so well designed, it can be put together without solder!

Now, the prospect of a RTR model in 4 and 7mm scales is on the horizon from Heljan. People probably won't build 02's any more. Probably not even me. Shame really, but that's progress. 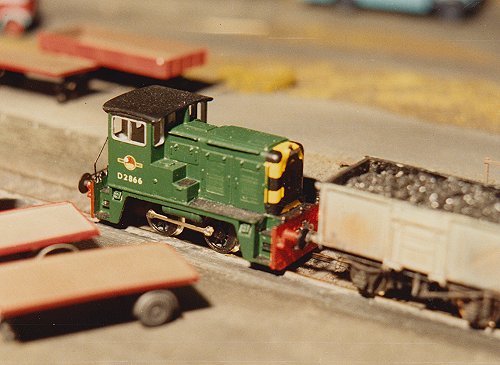 Is there a kit for a 3mm 02 available? At least it's unlikely to get gazumped by something RTR!
That 3D kit looks good, it seems to have pretty much everything you need to build your loco. I had one of the DJH kits and sold it on unbuilt though I can't remember why. They also did a nice H0 SNCF locotracteur.
There used to be a similar looking diesel shunter parked at the old industrial line between the old Brighton Main Line and the Quarry Line...

I remember Scotland Street, I spent a lot of time in front of it at shows.

I also built a DJH 02, in fact its sat in a display cabinet in my dining room. Possibly my first standard gauge loco kit. Nice kit, good runner, cast chassis. Might do a blog post on it. Personally I thing the DJH kit represents the prototype better than the Crafty etchy version, that heavily rounded bonnet front is better captured in a casting than flat sheet.

Good point about the front. You need to fill the bonnet with solder and file like crazy to put the curve in the etched version. It's one of those cases where a cast item would be better, but the Craftsman kit came from the days when etchers would do as much as possible in brass with only a few whitemetal details.