Clyde Puffer back on the water 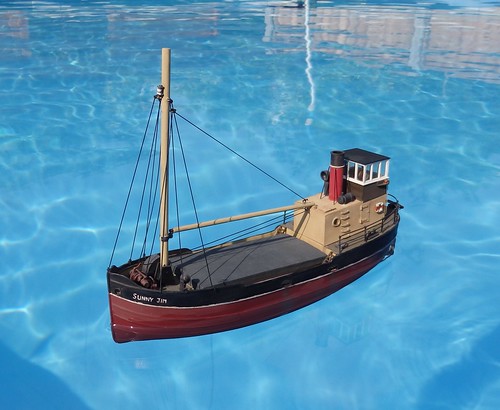 A whopping 5560 posts ago, this 1:72 scale Clyde Puffer was the first proper post on this blog. 15 years later, it's back, because I need to bring the radio control gear up to date for some filming.

The model is a Deans Marine kit built a very long time ago, and now a shelf queen in its display case. For various reasons, I wanted to be able to show that it worked, which meant either finding a working 26mHz transmitter, or replacing the reciever with something more modern. In theory, this is easy. But since it was the afternoon after yesterday's hose reel debacle, it wasn't.

What I had forgotten, was that binding a RadioLink TX/RX is different from the same job with a Planet set. On the Planet, you switch the boat on, press the bind button and then switch on the transmitter.

RadioLink, it's transmitter on, boat on, press bind button.

But if you get this wrong, 'cos you are doing the same as the Planet, it still binds, or at least appears too. But the RX just ignores controls from the TX. This is immensely annoying.

Once I had read the instructions, suddenly all was well. At the same time I swapped the 4XAA battery box for a 4XAAA flat version, aiming to lower the centre of gravity. There was also a bit of rigging repair required, the elastic thread having become brittle.

On the water, the boat lists like a yacht every time it turns and so the sail wasn't relaxing, or very long. Fortunately, I didn't need it in the water for my filming.

For the moment, the RX has been removed again and the boat reverts to Shelf Queen duties. Maybe one day I'll fiddle with the ballast a bit more, but it's not like I'm short of boats!

I've got that kit to build! Hoping to get on with it soon.