Time to wrap up the Selly Oak story as the model has now been delivered to its new owner.

The sharp eyed will notice that there are a few jobs still to do - laying the track being the main one. However, I've hit a really wall with the project and reached the point where I simply couldn't continue with it. I've never felt like this before with a project as far as I know, and it's not a whole lot of fun. Even admitting this isn't easy, but I know people will wonder what happened if I simply never mention the model again do I'll 'fess up to my failure.

The guys from Rapido have been exceptionally kind and considerate about this. Fortunately, the model is at a stage were it can perform it's main function - acting as a background for model buses, so it's not a complete failure. Since you can't see the track from bus spotter eye-level, perhaps things are quite as bad as I think. 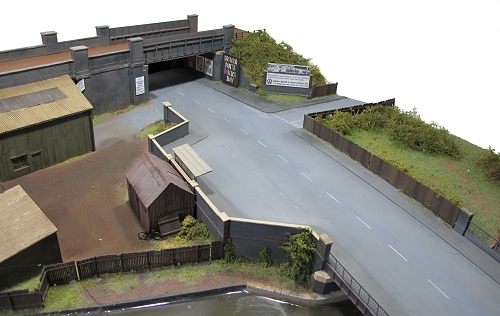 I'm happy with the modelling I did manage to carry out. There are several nice views to be enjoyed thanks to the complexity of the different levels. The general late 60s to early 70s griminess works - so the background won't detract from the model placed in the foreground.

1) I must never, ever take on a commission. Not a loco, not even a wagon, and certainly not a layout. I don't have the time or the stamina. My life is busy enough with toy trains without the added pressure of a build someone is expecting.

2) Don't do long term projects. The only other layout I recall feeling this way about was "Melbridge Town" which suffered from lots of hard work that became a slog. The two aren't the same in many ways, but I gradually ended up resenting them both. Anything I build needs to be completed reasonably quickly or I just get fed up with it. Maybe this makes be a bad person, but we can't all have Peter Denny's commitment to a single layout.

Anyway, the model is someone else's now and I feel better for passing it on.

I don't think you should feel bad about admitting that you've reached your limit stamina wise with this build, it's better than denying it and having the model languish in the background until the deadline passes and you end up with an annoyed client and a rushed to be completed model which you aren't satisfied with.
I do wonder if that's part of the issue with this build, we've seen you build up layouts previously on this blog and in BRM, but usually you retain some kind of connection with it, (even the previous Rapido build you flew over to Canada and exhibited it at the end,) whereas my understanding is that with this one, once you had finished the build, it was simply gone out the door so there's not the same sense of ownership.

I get this. I once built a model for someone but found it more stressful (to do it right) and less enjoyable than my own models. I admire those who build models professionally, but I don't think I could! I guess demo projects for magazines generally have the advantage of being quick.

Demo projects have to be reasonably quick, deadlines don't allow for much else!

Ever get the impression there might be a lesson here for certain beginners here - with unrealistic dreams of "basement empires"?

I'm sure lots of people must have fallen into that trap ... .

As for Rapido, if they were to want track at a later date (to allow for displaying locos), I don't think they'd have much difficulty adding this.

Of course, over the years, there must also have been lots of former railway lines where the track has been lifted, but bridges etc. are still in place. Some of these would have been turned into cycle tracks (not that this makes a lot of difference here). If they were to want this, it would also be easy for them to do.

However, as it is, they've got a good diorama, that does what's needed, but is also reasonably flexible.

What any customer is likely to be worried about is ensuring that their outsourced project (in this case, a diorama) meets the requirements of the brief (like providing them with a useful backdrop for photographing / displaying model road vehicles).

I suspect that this diorama gives them everything they need / were really looking for - so there's probably nothing to worry about here.

That mix of speed, stamina and quality is what sets aside a professional modeller.

I think it also depends on your focus. I keep having to dart around on to different projects to magazine work. Had I been able to take a week off during last year to dedicate to making progress, I think things might have been different.

Personally, I admire how much modelling and writing you do Phil.

Your hobby is modelling, your profession is modelling, you're editor for a modelling magazine, you write a daily blog on modelling (and people shouldn't underestimate how much time that takes), the model boats, the model train collecting, the magazine articles, the 'how to' videos... and then there's the novels (as a side line !).

Looking at the list of things you do I'm not surprised that your plate overflowed when you took on a sizable modelling commission with the historical research and the attention to period detail you put into it.

I hope you find the right balance for you... whatever that is :-)

I have known several modellers who started small businesses in the model field & then found it very difficult to separate hobby & work. If the business was succesful and kept them busy it all became work.

One of the attractions of a hobby is often that it is something different.

Can you better separate the two?

That is part of the problem. Normally, there are regular breaks with trips out to add variety to the time. All of those stopped, and the normal work demands grew (I blog because video production is so time-consuming), life becomes all about one thing.

Now, I shouldn't complain - there are many, many worse things I could be doing and yes, I do feel guilty about feeling this.

To echo Huw's point I think this illustrates how much bigger projects turn out to be than in our heads, which, of course, is what keeps me employed in a day job.

I'm sure I'm not alone in taking away a lot of learning points from this project. iN a way I would love to see a Mark 2

If there ever were to be a Mk2 version, I suspect that it would be rather more "generic" than the Mk1.

Let's face it - there was an almost obsessive focus on getting loads of details right - location and time specific bridges, advertising hoardings, bus shelters - and I'm sure that the list would go on and on.

A number of former West Midlands PTE buses found their way to other parts of the UK - for example, in the late 1980s, I travelled on some of their former Bristol VRTs, by now in Cwmbran, in NBC and later National Welsh liveries. (I'm sure I've also seen photos of them in other areas and liveries.) I'm sure that other designs were also acquired (either new or secondhand) by operators in other areas.

In practice, of course, models of any of these vehicles wouldn't look out of place in this diorama. OK - if you look really closely, you might notice details suggesting a specific time and place - but it's a lot more flexible than you might think.

As for projects turning out to involve lots more than people might imagine, I can remember dreams I had more than 40 years ago - of a layout that probably wouldn't even be achievable for the team behind Miniatur Wunderland" (well, I was in school at the time) ... .

Of course, the posts about this build have raised another point. How many people really want to spend every waking minute toiling at what started as a hobby. Some people know that I've got a HND in electrical and electronic engineering. After a number of (post redundancy) years as a full-time carer for my late parents, I probably wouldn't actively choose to work in this line of work. Electronics has been a hobby of mine since I was 12 (I'm now in my mid 50s) - I wouldn't enjoy it so much if it ceased to be a hobby and instead became more like a "treadmill".

In practice, of course, the stuff involved in full-time work in lines that used to be hobbies might not even be the "fun" stuff we did when they were only hobbies - but they might still take the fun out of the hobby stuff. This certainly seemed to be the case for me with electronics, when I worked as an instrumentation technician.

It's also why I reckon it's important that we have other hobbies that are significantly different - even if they're related (such as car or boat modelling - some of it perhaps also involving R/C - as a break from building model trains and layouts / dioramas).

In a sense, this probably also ties in with some other blog posts - about building kits of caricatured models of ships, road vehicles or aircraft. I can see the appeal of these - even if I don't know if I'll ever build the specific kits that were mentioned. Other hobbies are also available - just as well, too ... .

As for me, there's no shortage of alternative hobbies - some of them obviously connected with railway modelling (like adapting cheap LED light bars to fit inside model DMU or EMU trains) - and some perhaps less so (like listening to classical music - well, there's no requirement for anyone else to listen to it!).

Probably not too much else worth me saying, really ... .