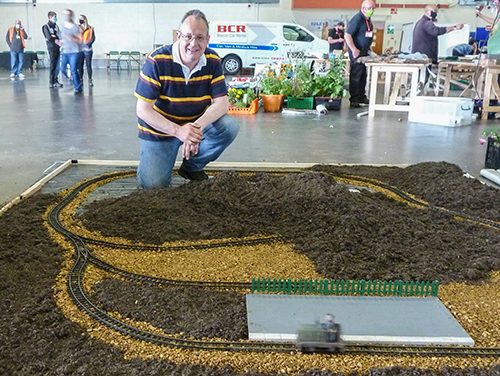 It's just over a week since the first large model railway exhibition since the start of the pandemic. All in all, despite a bucket-load of restrictions, it went very well.

The challenge for me was to build a 3m square layout, complete with plants, in an afternoon. I managed this, and you can read all about it in the August issue of Garden Rail, on sale 15th July.

It was weird being back at a show. The hall is large, tall, and had a big door open as both exit and to provide some air movement. On the day, (nearly) everyone wore masks, which made conversations a little tricky, but we all managed OK. After many months of face coverings, the crowd didn't seem that odd, even if you could only see the top of their heads. It was nice to put (part of) faces to names, and I had forgotten just how much information you get from chats around the stand.

Mask etiquette is interesting. When I arrived, I walked in wearing one, but was pretty much the only one. With around a dozen people in the hall, and a howling gale thanks to all the doors being open, I reasoned I could do without while lugging soil, stones and plants around. My own little social distancing square helped with the 1m+ separation!

Building the layout was 5 hours work, and boy, my legs hurt. Putting the plants in was particularly painful, next time I'll do some muscle stretching exercises first!

Numbers were planned to be down. The 16mm Association had planned on the basis that, as they guessed, we'd still be under restrictions. Extra space had been allowed around the hall and I never felt any more at risk than I would in a supermarket or shop. Hopefully, we won't have many more shows like this, but if we do, they can work. At least if the organisers can make the financial numbers work, easily the most difficult thing at the moment.

By 6:30, I was all loaded and heading home, ready to process photos and write some words for a very imminent deadline. All being well, I'll do the same next year.

It is interesting to think about the size of that layout, and how it would translate to many modern gardens. As I found to my cost before moving here, there is a big difference between having the space to build a railway, and the railway having any chance of survival amidst family life.

In an exhibition hall, 3m square doesn't look big - but it would dominate many gardens. However, I think I've shown that building a garden layout reasonably quickly is possible. Obviously, for a permanent set-up, you'd want to make changes, but then your need isn't to assemble the thing in half a day!