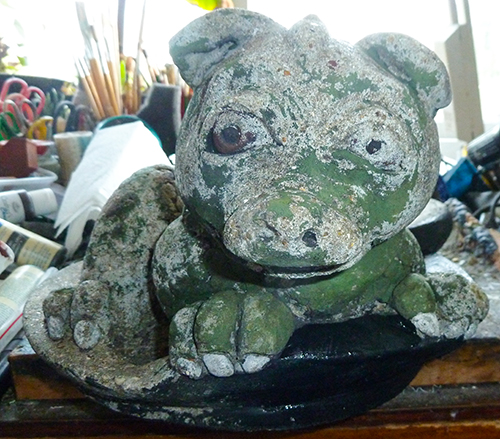 I wasn't confident I would have enough plants to fill my garden railway display and decided a little more colour would be useful, and ideally, something amusing.

Our garden is home to a number of concrete ornaments, normally nicely painted by myself. I use cheap acrylic paints, the sort bought from The Works for a quid a bottle, and even though these figures live out all year, the paint usually lasts for three, before they look tatty. It then takes at least another two for me to do something about it.

The little dragon climbing out of a manhole cover was well overdue for refreshment, and since he occupies a reasonable area, but without being too tall, I decided that his time had come to make a public appearance. He's always been one of my favourites too.

An hour of painting with cheap brushes and some sponged highlighting and he really looked the part. The paint needed a little thinning for the black cover to make sure there weren't any bald spots, but basically, I squirt it on a plastic lid and use straight from the bottle. 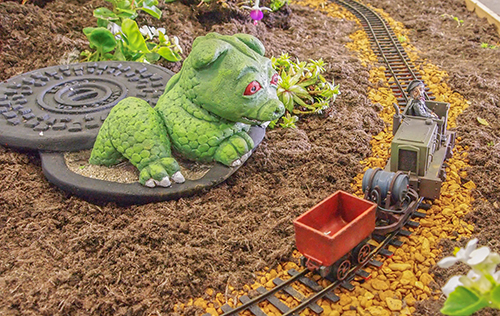 Although around the back of the display, a few people spotted him. Maybe I'm not taking the hobby properly seriously, but then I think it's all about having some fun!

lthough around the back of the

He looks fantastic Phil! Far better than a nome! Really like your painting - it really brings the best out of this character. Can you still get these castings? Woody.

P.S. hope your break from blogging has recharged your batteries? I did miss my daily dose of your blog and probably have read the 5000 or so archived posts over the years!

Woody - Sorry, no idea if the castings are still available. It's a long while since I visited a garden centre to have a look. I suspect they are short runs.

Blogging recharged a bit too, so there are posts all week! Thanks.