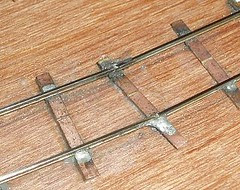 dry joint
Originally uploaded by Phil_Parker.
This was the only problem we experienced with the layout over the Harrogate weekend. One dry joint.

It wasn’t even a dry joint at the start of the day, the problem only appeared after a couple of hours. I blame the arctic conditions in the hall. They cause the overhead wire to tighten up so the trolley poles came off occasionally. They also made the rails shrink and broke the soldered joint on the far side of this pair of rails.

I won’t hear a word about the dodgy workmanship, or the unusual alignment of the track (who said “dogleg” ?). For some reason I’ve never quite got around to tidying this up. I can’t even work out how it managed to end up in this shape in the first place…

Some people say dry joints and electrical problems are to be expected when you take a layout to a show. I’d disagree. It should be possible to build the problems out as you put the model together. This was taught to me by people with much more complicated wiring than I’ve ever used and to their credit, they never had any real problems.
Posted by Phil Parker at 7:14 PM