What do you call a cardboard boat ? 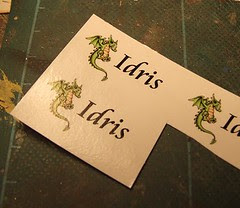 nametransfer
Originally uploaded by Phil_Parker.
Naming the cardboard boat has caused me to think a bit. Normally I use the name of a pet unless something more suitable presents itself. Since we’ve had lots of pets there is plenty of choice. Even nicknames come in handy – “Pigeon Pie” being the one given by my sister to our dog Ben and now to my Yacht Tug.

This time I have strayed a bit by calling the boat “Idris”. This isn’t strictly speaking the name of a pet or at least not a real one. Many years ago we had a new boiler (I think) which arrived in a big cardboard box. At the time I loved nothing better to play with than a cardboard box, some pens and sellotape. The box became a dragon named after the beast in “Ivor the Engine”. Idris lived in my bedroom for quite a while as I recall (it was along time ago !) and at the corrugated paper found in chocolate boxes. He was very well behaved and good playmate as a small boy could sit inside and hide from his sister.

As my only cardboard pet, Idris is the obvious name for a cardboard boat. I think it’s what the Americans call a “no brainer”.

Naming will be carried out using waterslide transfers printed out on the computer. The liven things up I acquired an image from a dead web site of a cartoon dragon. The whole thing was put together with a DTP package (Pageplus) which allows me to set the sizes and pick from a wide selection of fonts for the text. I made some spares just in case things went wrong – there is no better way of ensuring everything works first time !

The transfers are applied to the model and then given many coats of varnish to stop them sliding off the first time we go for a sail.
Posted by Phil Parker at 8:31 PM