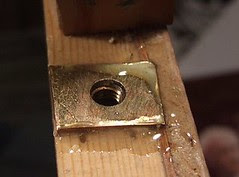 nut
Originally uploaded by Phil_Parker.
Once upon a time a fellow exhibitor regaled me with tales of his post show activities. He claimed it took six weeks of work to get his locos back into shape after a show.

I always wondered what he was doing with them over the weekend. My rolling stock goes back in the box after an event and the only reason it normally comes out is for the pre-show wheel clean and perhaps a light oiling. Perhaps he’s hitting them with hammers of something…

I have had to do a little maintenance after Harrogate though. For travelling there is a board that screws to the top of the backscene and stops stuff falling into the model and destroying the overhead wire. While we packed up I managed to cross thread one of the bolts and thanks to the power of the electric screwdriver, rotate the captive nut in the board.

So back at home I had to make the nut captive again. Since the hole was rather battered I soldered the nut to a bit of brass. Some Araldite holds the whole assembly in place – hopefully for a long while.
Posted by Phil Parker at 6:57 PM