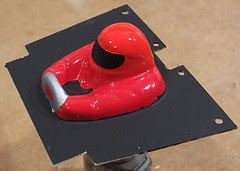 slingshot man
Originally uploaded by Phil_Parker.
On the last Sunday of every month at the model boat club we are racing Ripmax SlingShots. Last year we tried Tomkats but they proved to be pretty unreliable so races turned into tests of reliability and luck not driver skill.

I have one of the early batch of Slingshots which needed a bit of work. The coupling needed some glue to stop the collar at one end from slipping. I also superglued it to the motor shaft as there was a bit of slipping. The prop shaft end already had a flat filed to allow the grub screw to “key” properly.

With the top off the boat I painted the figure on a whim. Originally I fancied just painting the area around the driver black but this became a desire to give him a different colour helmet. Picking fluorescent orange wasn’t clever – the paint slipped off the supplied red colour. I suspect a matt paint would have worked better here.

The top was taped back on the boat with black insulating tape as the original stickers don’t take kindly to removal. This looks pretty nice if neatly done and anyway, most of the boats in the club have long since lost the original graphics for the same reason.
Posted by Phil Parker at 2:23 PM