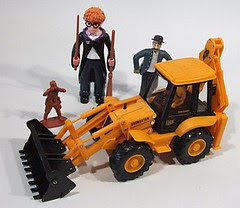 people
Originally uploaded by Phil_Parker.
What scale is this boat ?

It doesn’t say on the packet so I suspect the makers did it all by eye. It’s certainly not based on anything real as far as I can tell, just a generic cruiser. Not that this matters except when it comes to finding a captain.

If I planned things properly then I’d have picked some suitable figures up at the Harrogate show or one of the model shops I’ve been in recently. I didn’t so it was into Leamington to try and find something.

Another element of my lack of planning was not to work out what size person I needed. This meant wandering around a town devoid of toyshops or anywhere else apart from the local railway model shop. This is excellent but mainly 2 & 4mm scale so their figures were likely to be too small.

So during my wanderings I found a man in a JCB (£2.99 bargain), a Harry Potter rip off, G scale Bachmann man and a 1/32nd scale toy soldier.

It looks like the JCB man and the soldier will do the job with the others heading for the spares box to be used again one day. They both need modification but that’s part of the fun.
Posted by Phil Parker at 7:25 PM