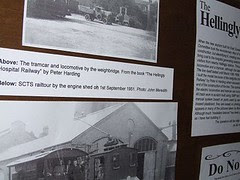 displayboard
Originally uploaded by Phil_Parker.
Along the front of the layout, I have a display board. It contains photographs, maps, adverts and a brief description of the model. The visitor gets to know that I haven’t made it all up – there was really a railway running to the Hellingly Hospital ‘cos they can see the pictures and everything.

The documentation also gives the punters something to read which makes up for the lack of 12 coach express trains hurtling through the scenic section. I like to think this entertains them a bit although I’m probably deluding myself. In reality they are just looking so they feel that full value for money has been squeezed out of the show.

Anyway, this paperwork has been on the model largely unchanged for several years. I know very few people will notice but some might, especially if they have seen me before.

I also have several new photos that haven’t been seen before so I must take the opportunity to do something about them. The current crops aren’t that great quality either as I did them on a laser printer years ago so some inkjet versions on proper photo paper will improve the display.

Funny job this. When you start building toy trains (sorry, finescale model railways) you think about track and trains and all the conventional stuff. Doing the research perhaps enters your head but actually displaying this as well as the model is still unusual. Putting the model in context isn’t a bad idea. It certainly helps defend yourself against the charge of being a grown man just playing with trains. Good grief I’m nearly David Starkey now !
Posted by Phil Parker at 6:58 PM