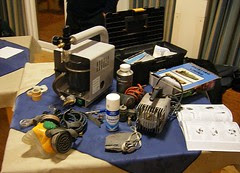 spray stuff
Originally uploaded by Phil_Parker.
Last night I gave a lecture. 35 minutes on "Airbrushing for idiots" to the assembled members of the KMBC.

Some people go to pieces at the though of a bit of public speaking, even to their friends, but I enjoy it. Having the room pay attention to you seems like a good thing to me !

All I did was quickly run through the airbrushing equipment I have, brush, compressors, masks etc. The I worked through the process of the painting itself along with a brief run down of materials.

I should have written some Q-cards to help but thanks to a fraught time at work this week I didn't have the time to get notes together. Still, my off the cuff session went down well and several people claimed to have learn something.

Once I shut up the club members were encouraged to actually handle the equipment. Obviously I wasn't able to let them have a go what with the talk taking place in a public hall and everything, but at least several have had a good look at an airbrush.

Now I admit spray painting isn't for everyone, but a real mystique has grown up around it which puts people off. This is a shame because for a modest investment you can have a useful addition to you model making armoury.

Oh, and if anyone wants a repeat session, get in touch I rather fancy touring the country on speaking tours. I'll even write notes and do at least an hour !
Posted by Phil Parker at 7:52 PM