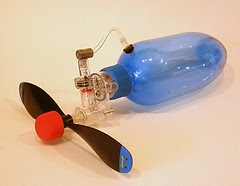 Every year the Kinghtcote Model Boat Club holds a competition. A couple of years ago it was Tomkat racing, at which I was hopeless. Then we added Slingshot racing, which I won after a slow start.

This year, it’s plank racing. You can read the (hilarious) details here – go on, the rest of this stuff doesn’t make any sense if you don’t !

Plank racing is more of a “Great Egg Race” style challenge than an out and out racing series and all the better for it. Who needs to hurtle round in circles when ingenuity and model making skills can be brought to bear ?

To my mind there are two parts to the challenge:
Get the plank across the lake.
Hit the target on the other side.

I’ve been pondering on these and have come up with the few options, for the power bit at least.

Option one turned up while browsing in Maplin last weekend. Incidentally, aren’t Maplin shops turning into a nice replacement for the Tandy (Radio Shack for US readers) stores of years ago ? Just what the world needs, a high street store where you can buy a transistor off the shelf…

Anyway, option 1 is an air engine (if you are wondering why I don’t use an electric motor, go back and read the rules, I told you it wouldn’t make sense otherwise) from the Science Museum. It’s meant to blow along a four wheeled chassis loosely described as a car. What you get is the contraption in the photo and a pump. Filling the tank with air and then flicking the propeller gives about 20 seconds of thrust along with a sound very similar to an IC engine.

This is a really impressive bit of kit. I think I can put a boat propeller on in place of the aircraft one – it will be more efficient at driving the plank and the tank capacity need to go up. A large pop bottle was the obvious idea but I think replacing the end of the current one with a long balloon might be better. That way the pressure stays up as the air supply drops.

And just as I start fooling about with this, the BBC reports that someone is making air powered cars. Perhaps I can refit my Type 2 ?