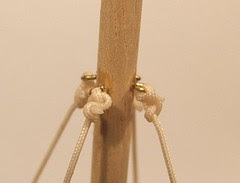 rigging
Originally uploaded by Phil_Parker.
Rigging the trawler is an easy job, it’s just that I kept putting it off. This was sensible I thought, because masts and ropes are vulnerable when working. You don't want to whack the mast while working and rip a hole in the deak or snap the dowel.

First up, the mast was, in my opinion, too long. I lopped it off at 18cm. This is a few cm higher than the cabin roof which is more in keeping with the cartoon appearance of the model. I think in hindsight I might have gone for 20cm but I’m not sure and don’t have a spare length to dowel handy.

The rigging is attached with wire loops. They had their tails shortened and then glues inside pre-drilled holes with superglue.

Finally some nylon string I picked up at the last Deans Marine open day was carefully tied in place at each end. I should have looked up a proper knot before starting but forgot, leaving me with some less than ideal fixings. To make sure these stay tied I flooded the knot with superglue.

The final touch was to paint the mast 147/white and ropes pale brown. I’ll run some darker colours over these to mute the colours in line with the rest of the model.
Posted by Phil Parker at 4:03 PM