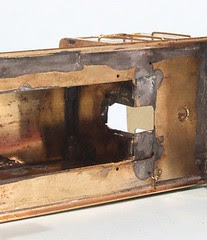 The Ruston 165DS locomotive will eventually use some of this new fangled DCC power. I don't really understand it but know enough to realise that somewhere the model will have to accommodate a chip. Not one of those excessively yellow ones from the chippe near my local either...

That's easier said than done with a tiny model. Ideally the bonnet should be filled with lead to improve traction and road holding. That leaves the cab as home for the microprocessor. Fine but it's a solid box butted up against the back of the bonnet.

There was nothing for it but before I fitted the parts to the footplate to break out the piercing saw and hack my way in. I don't know how big the chip will be but if they fit in N gauge locos, I reckon that I've left enough of a gap. If not, the hole can be enlarged with a file.

The is a common problem with locomotive kits. They just don't think DCC. You can't blame the designers - many models date from the era when "Command Control" meant Zero 1. Besides, if you can build a kit, then finding a home for a chip isn't likely to be beyond you. For most locos it's not going to be a problem anyway as there will be plenty of space.  Possibly more than in an RTR because the mechanisms tend to be smaller and etched bodies are thinner than plastic.
Posted by Phil Parker at 2:54 AM