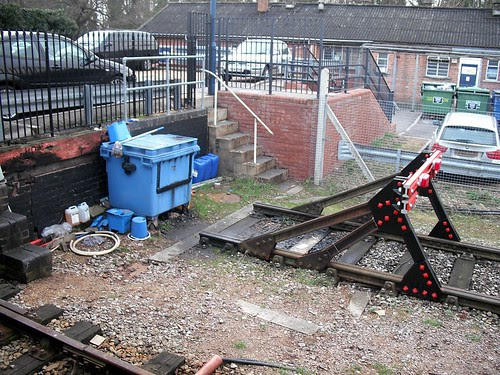 At the station on Wednesday, I spotted this very modelable scene.

Firstly, you have a buffer stop - the Peco version would probably do the job for this although since all the rails it's made up from are straight I can't see a big problem with scratch building. The paint job is novel - did someone have too much time on their hands ? Notice the red lights and electrical trunking on the face. The siding is unused by multiple units which don't have light-squashing buffers.

Behind is the cleaners store. There is a big plastic bin (Skaledale) and a pile of buckets, jerry cans a other bottles. On the top of the bin is a mop and beside it a hose. You'd need to scratchbuild these but that's easy too.

Behind, notice all the tubular handrails on steps and the edge of the platform. Most of these are down to modern Health & Safety requirements but I some are to restrain badly parked cars to the tarmac and not into the space for trains.

This isn't a big scene and on a large layout you probably wouldn't notice it, but I like this sort of modelling and would be happy to while away a few hours recreating it if I had a suitable layout.
Posted by Phil Parker at 1:12 AM