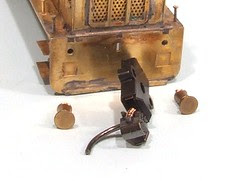 Just when you think you can see the end of a project, the kit fights back. With the 165DS, this turned out to be with the buffer beam.

First - there are no buffers supplied. Now I'm not particularly fussy in this area. There are plenty of people for whom there can be no compromise; but for me, if they look about right, I'll live with it. However in this case I've got to make some decisions. Obviously I searched through the kit bits and the packaging first to save myself this but no, the kit is buffer free. That's the trouble with weirdo scales.

Second, Kadee couplings have been specified. While these originate from a country that can't spell colour (for US readers, it has U in the middle of it. Yes it does. The Queen says so.), they are pretty good if a little expensive. Were you to originate from a country that can't spell grey (US readers note it's E not A. The Queen says this is right too.) then they would be absolutely what you want since they look just like those things in the middle of the buffer beam on your countries trains. I know this, which is why they are fitted on my On30 stock. On UK stock, there are people who use them, but not many.

Digging out some No.5 Kadees, described as "'ole reliables" I have wondered just where they are to go in the nice, deep, industrial buffer beam. Worse, the box behind the coupling will be in the way of the bolts that attach the frames to the body.

So, there are some challenges ahead. I have found some buffers which only need a lot of alteration so these might help. Looking around teh Interweb I might have found a solution to the coupling issue. Parts have been ordered, I'll let you know what happens when they arrive.
Posted by Phil Parker at 1:06 AM

"Colour" (if you insist) does not have a "u" in the middle. It's more towards the end.