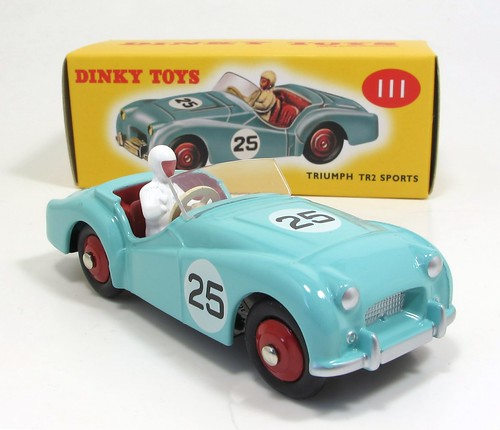 To be honest, I wasn't going to mention the new DeAgostini Classic Dinky Toys Collection partwork. I'd seen the attractive, in a vintage way, car and magazine combo on the newsagents shelves a few times. The £2.99 price tag had tempted me slightly but really, I wasn't going to buy the rest, TR2's aren't my bag (TR7 - yes please) and anyway, I don't need more "stuff".

Then I read the thread over on RMweb covering the topic. There are of course suggestions that these are "fakes" and will upset collectors.

The Atlas/DAgostini models have been in production now for around 4 years and due to their relatively high quality and the fact that they are properly licensed and authorised they have actually held their value well - indeed many of the regular price releases are freely sold at quite a bit above their issue price. They are reproductions rather than fakes and certainly in relation to some of the rarer Dinky and French Dinky models where pristine originals command hundreds of pounds they have filled a gap.

He goes on to say he's sold spare or unwanted models from previous series for a profit on eBay. 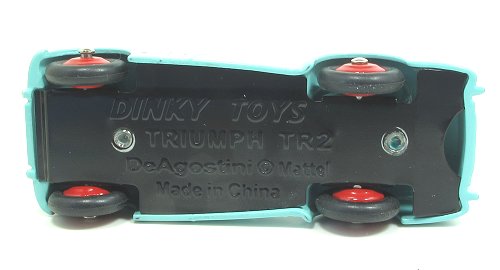 andyman7 isn't wrong. The model is well made, the finish is probably better than the Dinky original. On the base, it's clearly marked as a reproduction. You can't claim this is a fake - it isn't pretending to be original.

A quick look on eBay shows many of these partwork models clearly marked as such - and on offer for many times the £2.99 price of the first issue. Later issues will be £11.99 (Issue 2 £7.99) which seems pricey for a toy car but presumably the later ones will be much rarer.

An original Dinky TR2 can easily cost £50+, so if you want a collection without effort or significant cost, this is probably the way to do it.

Sadly, I find myself looking at the "Kodak" Bedford 10cwt van with issue 2 and thinking, "That looks nice" and issue 4 is a Beetle...

If nothing else, this is a cheap way to get yourself a model to practise your painting on.
Posted by Phil Parker at 5:30 AM

I'll pass, I still have a Mallard unstarted here, (much higher cost than the Dapol model rtr, plus I don't have a motor/gearbox combo yet,) these partworks have a way of costing much more over time than you would spend if offered the package in a lump sum.

I have yet to decide what to do with the kit now, I want to build it, but the high cost is actually a hinderance in case I mess up. I think I need to build a couple of 00 loco kits first to build up my confidence. Either that or find a willing buyer to do it justice, knowing i'll take a loss in the process