Time for the big guns? 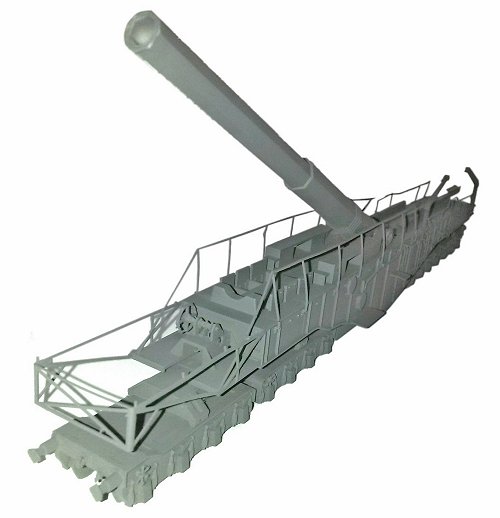 The biggest surprise last week in model railway land was the announcement of the "Boche Buster" rail mounted gun from Oxford Rail. I was the the London Toy Fair and managed to handle the 3D printed sample - it's a beast of a model that is going to be very popular with anyone who appreciates something different to run on their layout. At £50 a go, that will be a huge number of people I suspect.

(As an aside, the catalogue number OR76BOOM01 is brilliant. Top marks for whoever came up with that one)

Sadly, the gun is non-operational so there's no point in stocking up with ammunition with name of your nemesis on popular web forums inscribed on the outside. 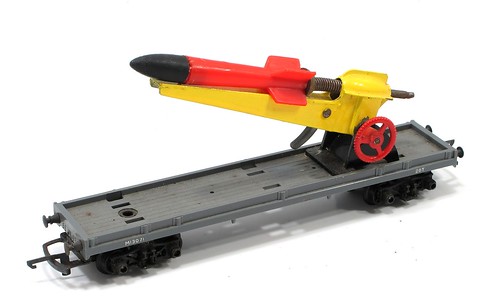 For operational model warfair, you'll need to track down a Triang R216 Tactical Rocket launcher. Launched (geddit?) in 1957. Available with several different colour rockets and launch devices, it's a proper collectible, but available for surprisingly small amounts of money. This one only cost me a fiver a few weeks ago from Footplate Models in Kidderminster.

The rocket sails several feet when fired. I suspect that the spring has weakened over time and when new it would be a pretty potent weapon against your kid sister or other enemies.

I'm not one for war toys at all, but I can't help liking this brightly coloured accessory. Perhaps back in those days, people didn't take the hobby so seriously? Perhaps the "Boche Buster" will show that many still don't, they just want to have fun.

(There is an excellent article on the rocket launcher by Robert Forsythe here.)
Posted by Phil Parker at 5:30 AM

I suspect illI end up getting one and suspect they'll be rather popular with the amount of crossover potential there is with such a model.

"Sadly, the gun is non-operational so there's no point in stocking up with ammunition with name of your nemesis on popular web forums inscribed on the outside."

Aaarrgh! That spoils the fun!

Some of us had really been looking forward to "zapping" (insert name of "favourite" forum troll here).

Joking aside, I hope the bogies can be swivelled - as I've been led to believe that rail mounted guns were intended to be "aimed" by sticking them on curved track and moving them along until they were pointing in the desired direction.

Somehow, though, I'd imagine that a lot of their military "value" might have been psychological - the perception of this "supergun" bearing down on you, capable of chucking projectiles that could wipe out a large area of a city.

In practice, of course, the moment something got chucked out of the barrel, those awfully beastly guys on the other side of the Channel / North Sea would have been aware of the thing's existence - and exactly where it was.

In next to no time, every one of the Luftwaffe's bombers would have had the thing in their sights.