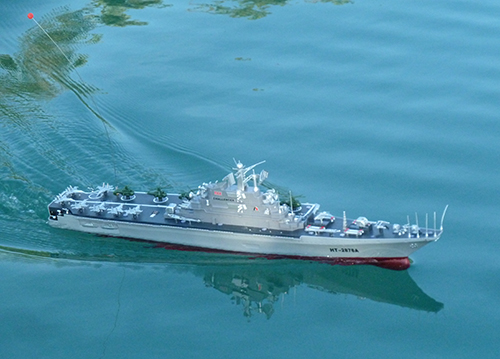 I need to ban my Dad from ordering stuff over the phone. Left to his own devices when calling Howes, he managed to buy a RTR aircraft carrier.

Arriving in a big box, the 78cm long model includes many hilariously badly translated English phrases. You get quite a lot of model for your money, although despite the prototype photos and ship names on the packing, isn't a desperately realistic model. Those helicopters on the deck look like the one the KGB boss arrived in at the end of For Your Eyes Only, not the American ones you might expects on a ship like this.

To be honest, the whole model appears to have been designed by a 12-year-old boy left to his own devices with a pencil. There are aeroplanes, helicopters, guns, rockets and unidentifiable things that are probably offensive in some way.

Power comes from a 9.6v rechargeable battery pack. There's no on/off switch so it need to be unplugged between sailing sessions. The radio gears is a bit rubbish since you swamp the whole 26 or 4o MHz frequency, but this isn't such an issue nowadays with everyone else on 2.4,

On the water, operation is from a controller using tank steering - two motors and props and two sticks for forward and reverse on each. None of that steering using a rudder here. The motors will only work if the model is afloat, or if you touch the contacts on the deck. 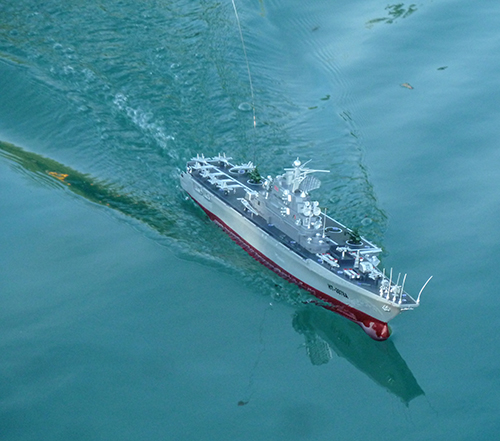 Sailing - well forget realism. This thing can motor. It's fast and turns quickly, especially if you hold the sticks in opposite directions. If you have even seen the film Battleship, where they handbrake turn a destroyer (I think) then you get the idea. As you can see, the model does get up on the plane, not something large warships do as a rule.

The battery pack allows for at least 20 minutes full-tilt action, probably more as the batteries are exercised over a few sessions.

Despite all this, sailing this model is fun. It won't please purists but who cares. I enjoyed bombing around the lake more then is entirely decent.

Maybe a better RC unit could be fitted, but you'd need to put in new speed controls, and probably fit some rudders unless you fancy adding a mixer. That's a lot of money and work (refitting RTR boats is harder then building a kit)for a model that doesn't really justify either. Forget detailing it, you are putting lipstick on a pig.

Instead, just enjoy the model for what it is. Fun.

Is based on Russian ship Comrade, Nyet?

Looks like it's based on the Russian Kiev class carriers.