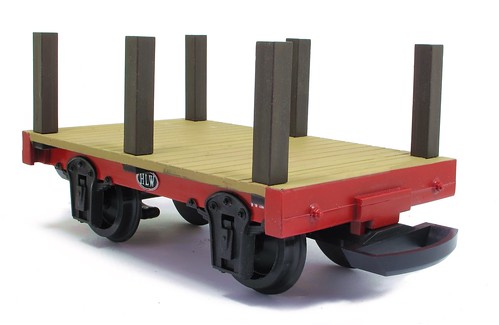 A few weeks ago I wrote up building some HLW wagon kits for the garden railway. At the time I didn't mention there was a fourth kit in the stash for a flat wagon.

The plan had been to build all the models as a batch, but when I came to do it, there were only enough axles for 3 models, the other pair having been lost along the way.

I dug through the stash of bits and couldn't find anything long enough and of sufficient diameter, so the odd-one-out wagon stayed in its bag which I looked around for something suitable on-line.

May weeks later, these arrived. First problem, they were too fat for the wheels, so I had to drill out the wheels, stub axles and axle boxes to suit.

Then I had to cut the metal to length. No saw would touch it and neither would files. In the end, I used a slitting disk in a Dremel. Lots of sparks but it worked well and I soon had everything fitted together.

The wagon rolls just as well as the "proper" ones and I think looks great. Once I have tidied up the garden line, I'll be able to give my new goods train a run.

Looks like you bought High Speed Steel, a hardened steel used for making cutting tools, rather than mild steel, which is why nothing short of a grinding disc would touch it. Personally I prefer silver steel for axles etc. which is ground to size and can be cut with a saw but is also capable of being hardened for making cutters (fly cutters for shaping the bottom of boiler fittings for example).