Wagons for the Toy Train part 2 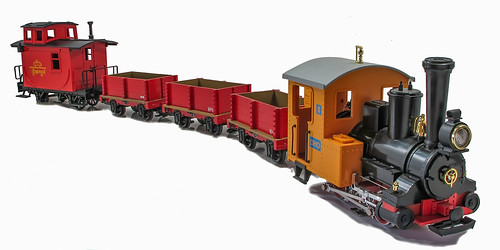 I know "pretty" isn't supposed to be in the vocabulary of a "serious" railway modeller, but outside, I quite like it. Colourful trains running through a colourful garden setting works for me.

The HLW wagons fit nicely with the plasticy Oho and caboose from LGB's "Toy Train" range. I think a longer train is called for. There is a flatbed in the collection, but I've lost the axles for this in storage, but when the order I placed for replacements turns up, I'll finish it off.

Toy Trains have one big advantage in the garden. They make great track testers. If Oho, or his brother Otto, fall off due to stray ballast or track in need of fettling, they seem to survive. I'd rather risk then than a pricey Accucraft Isle of Man loco!
Posted by Phil Parker at 5:30 AM

I can't help thinking Otto would benefit from some slight Disneyfication to make it resemble an Accucraft Ruby - just a wooden cab and a pilot beam would do the trick.

'I know "pretty" isn't supposed to be in the vocabulary of a "serious" railway modeller but, outside, I quite like it. Colourful trains running through a colourful garden setting works for me.'


I'm not sure about that one.

I wonder how many models (and layouts) only comply with some real railway's designs or operating practices to a limited extent - whilst actually being fully compliant with "Rule 1".

For any non-modellers looking in here, "Rule 1" is often regarded as the most important cornerstone of many hobbyists' work and can effectively be paraphrased thus:

(It goes without saying that other, less subtle, variants are also available ... .)

Seriously though, whose models and layouts are we talking about here - so whom have you really got to please?