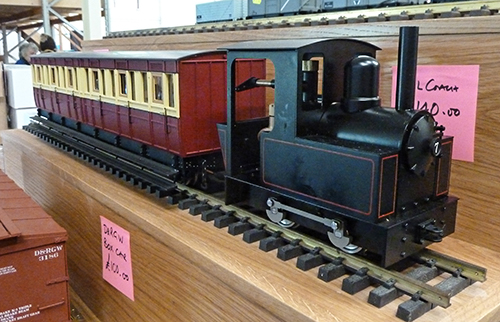 So, there I am at the Accucraft UK open day with may Garden Rail jacket on. The stand of bargain factory seconds includes a Dora and IOM Pairs coach.

Now, I've always wondered if Dora could be turned into the power unit for a steam railcar. A quick re-arrangement of the shelves helped my thinking.

It's not such a stupid idea. The first change I'd make is to go for a shorter and taller coach.

My choice would probably be something from the IP Engineering range as plywood withstands heat better than plastic.

There's also the issue of Dora being a bit flighty (I'm told) so the model might benefit from some sort of inertia control. A Slo-mo wouldn't fit, but there must be a way.

It's very much a back-burner idea at the moment, but then it's nice to have some of those burbling away in the back of your head.
Posted by Phil Parker at 5:30 AM

The Slo-mo can be fitted to unpowered axles, with enough weight, so maybe the unpowered coach axle would be an option?

This sounds like a very credible concept for a potential build project - not too far removed from various steam railmotors tried by a number of UK railway companies early in the 20th century.

It sounds even more like a now preserved (UK built) "coffee pot" railmotor, used by an Australian railway - or a simplified, On30 clone - in an article by (I think) Jim Fainges, in an old issue of Narrow Gauge Down Under.

No prizes for guessing why that article sticks in my memory - that's right - it got me wondering how feasible a homebrew version might be.

Will such a model actually get built? In all honesty, your guess is as good as mine - but I suspect a lot of modellers come up with a number of "one day" projects ... .