Off to the moon with Airfix astronauts 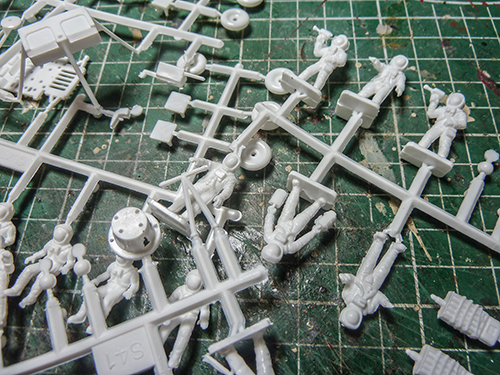 To celebrate the 50th Anniversary of the moon landings, Airfix has re-released their Astronaught set as part of the classic range of models.

The classic range is really a chance to make a few quid by re-releasing old kits with minimal work on the moulds. OK, so they aren't up to the standards of modern releases, but it's a chance to get hold of a model to build that often sells for high prices second hand. As far as I can tell, everyone wins.

Anyway, I had a set of astronauts many years ago, I think there are one or two still in the figure pot, and with all things moon in mind, fancied another pack. At the Hornby shop last weekend I spotted they were out and for £4.99 grabbed a box.

The moulds must be pretty old as sadly the figures are made in a very rubbery plastic. It's more vinyl than polystyrene, which makes cleaning up any flash pretty much impossible unless you can get some tiny scissors on it.

I painted my models with Humbrol 147, followed by a dry-brush with matt white. The visors were gold, washed with Citadel weathering black ink. Not sure if this works as an effect, but I think I prefer it to a gloss black. Pipes are picked out in pale grey (64) just for a bit of variety. Valves are red and blue.

They are a bit of fun. I'm not planning to build a moon diorama, but maybe the odd one will find themselves in the background of a railway project.

After finishing the painting, I carried out a little more research. Warwick museum currently has a moon landing display and it includes a clear disk containing specks of real moon rocks collected by the Apollo 15 and 17 missions. Tiny specks obviously, but real moon rock! 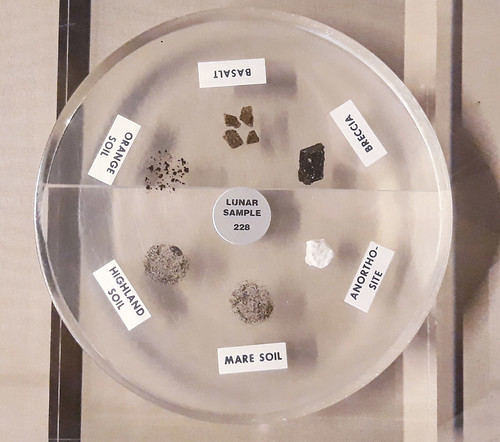 Much loved when I was a kid.

A couple of comments.The gloves were grey, and the suits got very dirty, which along with the harsh light means it would be worth some weathering, especially around the legs.

If that rubbery plastic is anything like the stuff that found its way into some other makes' railway figures, you might also need to be careful about contact with some other plastics.

As for trimming off flash, another option might be a very sharp woodworking chisel. (I've often found a quarter inch chisel great for this sort of work.)

Failing that, there's always an X-Acto handle with a chisel blade of similar width (not sure but, from memory, I seem to recall this one being a #17, or thereabouts - I generally find this style just as useful as the #11).

Another useful X-Acto blade used to be another one designed to fit in the small handle - which was very much like a 1" strip of junior hacksaw blade.

Of course, with this one, it's easy to make your own homebrew versions from broken junior hacksaw blades - but just remember to file the ends, to stop them hooking, catching or tearing on stuff (or fingers!) they shouldn't - just saying ... .

I always wished that Airfix figures were made in polystyrene rather than what seemed like polythene, as they would have been easier to paint and modify. I imagine there must be a technical reason why this is so? Or simply economics?

There were some good lunar photos on www.kenrockwell.com/News on 20th July if you are looking for painting inspiration?

As I say in the post, the plastic used is down to the age of the moulds. To reduce wear, they use a softer material. I suspect it's this or nothing as recreating the moulds isn't economic.

Phil, actually the original version was also in a very soapy soft yellow vinyl that was dreadful. In particular, it made the LRV and the concept vehicles pretty much impossible to build

The LRV has defeated the glues I've tried for assembly, so we really are back to the future!