New locomotives for the Groudle Glen and a cake conundrum 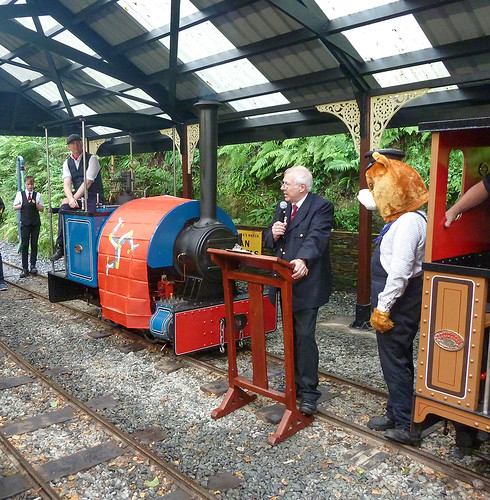 A narrow-gauge railway with not one, but two new locomotives?

Last weekend, in the pouring rain, I watched new locos Otter and Brown Bear be officially launched at the Groudle Glen Railway. There were speeches from the chairman and a couple of politician's and then cake.

This presented me with a conundrum. You see, on my latest Manx trip, I've become familiar with the local Bonnag. After a trip to Carigneash where there was the plain version cooking on the hearth, I tried a fruit flavour which was a bit rich. Sea Lion Rocks tea rooms do a less rich version, but they insisted I, and all the others present, had some official cake.

Not to worry, the two locos are lovely. Brown Bear has been a long time in the planning and I've seen it a couple of times in the early stages of the build. Now complete, it joins sister Sea Lion as an essential piece of motive power. 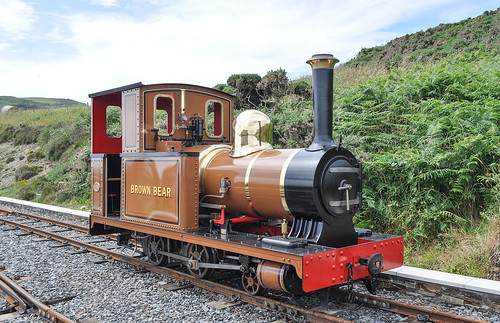 Strictly speaking, Brown Bear should be called Polar Bear is it wears this locos chimney. The joke is they hung this from the roof and built a loco underneath. However, with Polar Bear still running at the Amberley Chalk Pit museum (As seen in the film A View to a Kill as well as Dalek Invasion Earth 2150) and the GGR also owning an electric Polar Bear, naming the loco after another animal that could be found in the glen zoo makes sense. It's what the Victorians would have done.

Otter came about because after the recent locomotive drought on the line due to dodgy water, those in change felt that an extra loco would be a good idea as people expect to be pulled by something that goes chuff. 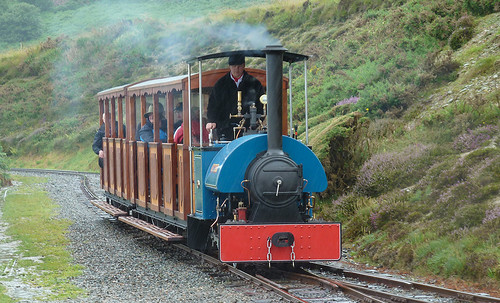 Due to a surprise availability of a new-build Bagnall design saddle tank, and being able to arrange the funds to pay for it, there is a new, blue steamer on the line. One with a family similarity to the others. It's a lovely looking machine and the blue really suits it. The taller cab must be nice, but the open sides less appealing when the rain is falling!

More railway photos from my holiday on Flikr.

Small correction Phil - None of the footage shot for 'Daleks - Invasion Erath: 2150A.D.' Was filmed at Amberley.

By coincidence, the people over at the Dalek 6388 project, documenting the history of the props in incredible detail, just finished putting out a five part mini series, episodes three and four focusing on the locations used for the film and the where they were in relation to eachother within Shepperton studios. Certainly worth a look:
https://m.youtube.com/watch?v=0yeOXBNKQts

I love the GGR locos, especially that they all have a family resemblance. Reminds me of your post about modelling consistency!

Otter wasn't built on spec, the original customer had to drop out making it available to the GGR.